The Young Nelson Society of Washington (YNS) is a young professionals (ages 21-40) group who host a calendar of social events and activities supporting the Washington International Horse Show (WIHS). Founded in 1958, WIHS, is a historic and prestigious equestrian event in the heart of the nation’s capital benefitting charitable and military causes. WIHS is a 501(c)(3) nonprofit organization.

Mission
The Young Nelson Society of Washington is committed to growing and engaging a fun, energetic group of DC young professionals to raise awareness of the Washington International Horse Show through social membership and fundraising events and activities. Named in honor of George Washington’s war horse, Nelson, one of America’s most valiant equine heroes, the Young Nelson Society of Washington celebrates the bravery, inspiration, partnership and joy a horse lends its rider.

Membership & Benefits
Through social fundraising events throughout the year, YNS supports WIHS, one of the top equestrian events in North America, and its charity partners, including: Tragedy Assistance Program for Survivors (TAPS), Capital Breast Care Center and United States Equestrian Team (USET) Foundation. All of these charities embody the courage, bravery and trust needed to achieve independence and overcome adversity, like the partnership between George Washington and Nelson.

YNS events are a great networking experience for equestrian enthusiasts in and around Washington,D.C., Maryland and Virginia. YNS members are invited to various happy hours, parties, races, steeplechases and other exclusive experiences to mix and mingle with new and familiar friends!

Why the name "Young Nelson"?
It is rumored that during the Revolutionary War, George Washington's favored mount was nicknamed "Old Nelson". Most colonial artwork depicts Washington on his other mount, Blueskin, who was considered to be the more handsome of his horses due to his striking grey color. Washington, however, favored Nelson, a gallant chestnut undaunted by cannon fire and the sounds of battle. Nelson's bravery carried Washington through much of the Revolutionary War and ultimately to the surrender of Lord Cornwallis and the British Army in 1781 in Yorktown, Virginia. 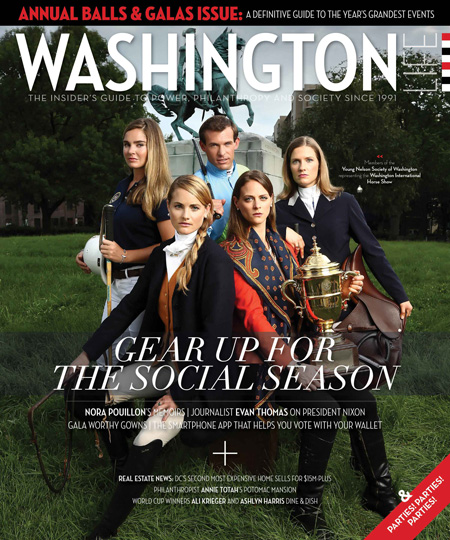