WASHINGTON, Oct. 27, 2017--It was a bittersweet night for show jumping fans as they saw one of the sport’s best in his final competition. HH Carlos Z went out on top with victory in the $50,000 International Jumper Speed Final, presented by the Man O’ War Project in partnership with Columbia University Medical Center. As HH Carlos Z and McLain Ward (USA) entered the arena for their victory gallop, it was announced that “Carlos” would retire. 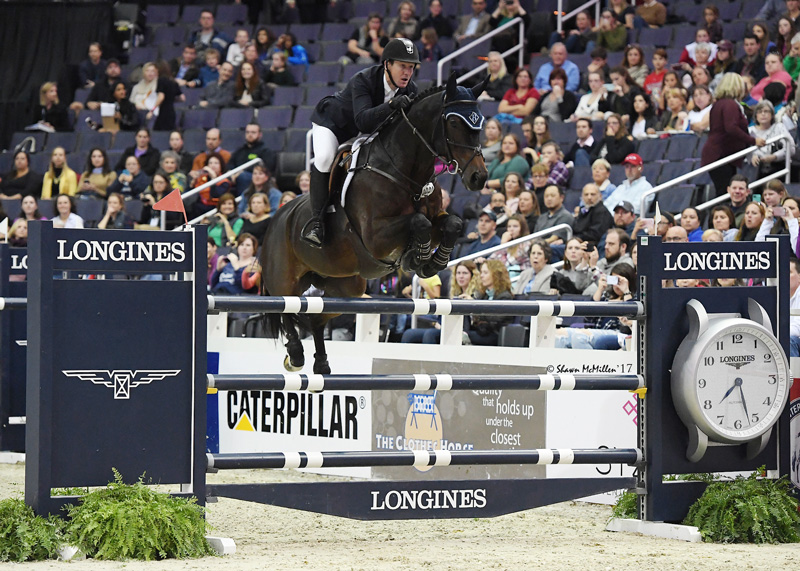 Riding out of the 11th spot in the order in the faults converted (Table C) format class, Ward and HH Carlos Z, a 15-year-old Zangersheide gelding by Chellano Z owned by Double H Farm, finished in 57.77 seconds.

“I love the format of this class,” Ward said. “It's a 1.50m, but a Table C, so people can have a fence down and still be in the mix. I think it makes it a much more exciting class for the spectators.” 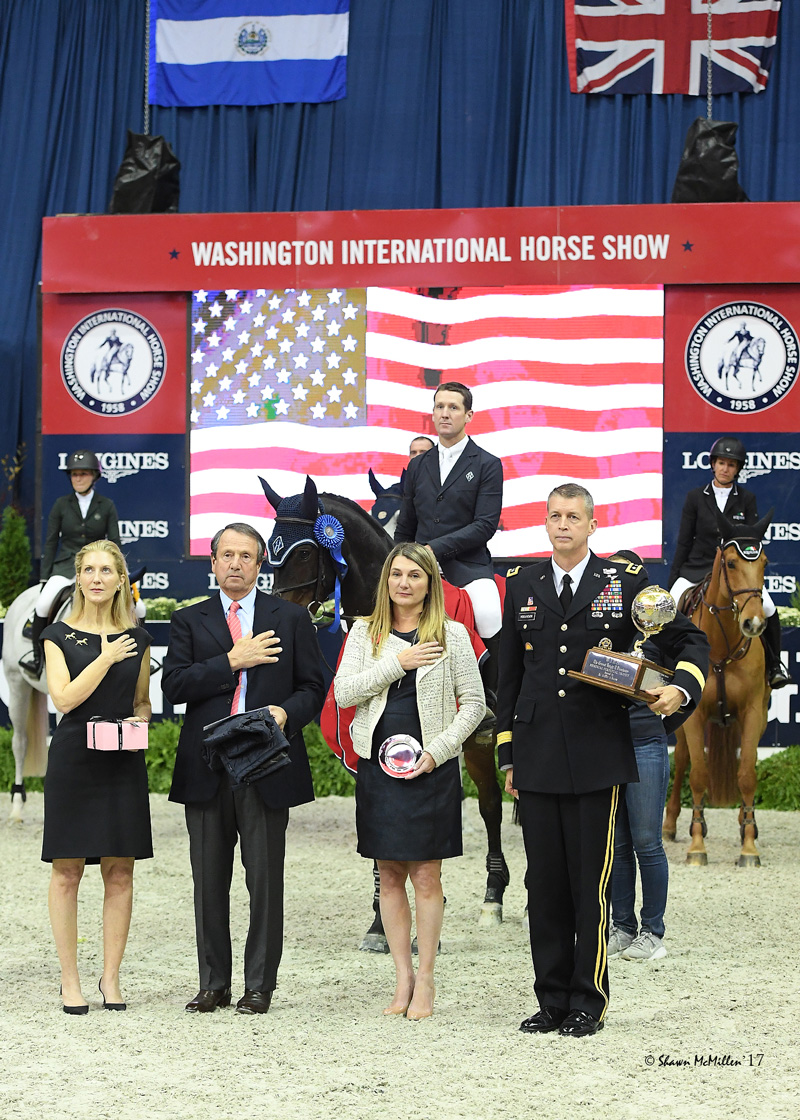 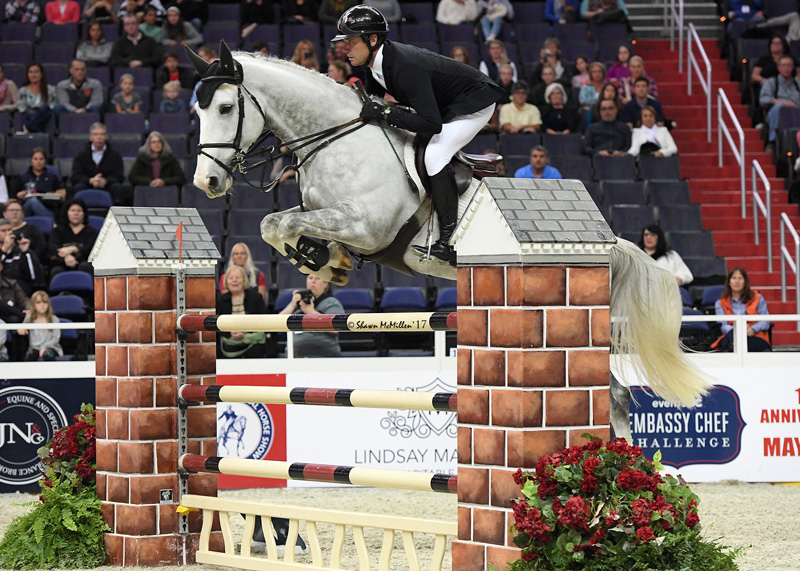 Following the class, Ward stated, “That's it. He's done. He's given more than he had to give. He's been an incredible horse, an incredible winner. He's won everything from five-star grand prixs and jumped Nations' Cups to being a day in and day out winner.

“I wanted the horse to win a good class to finish on,” he continued. “I didn't want him to end poorly. This is a nice moment, and I'm very, very grateful to Mr. Harrison and Double H Farm to have the opportunity to ride this horse and also for the opportunity to care for him and retire him in the way he deserves.” 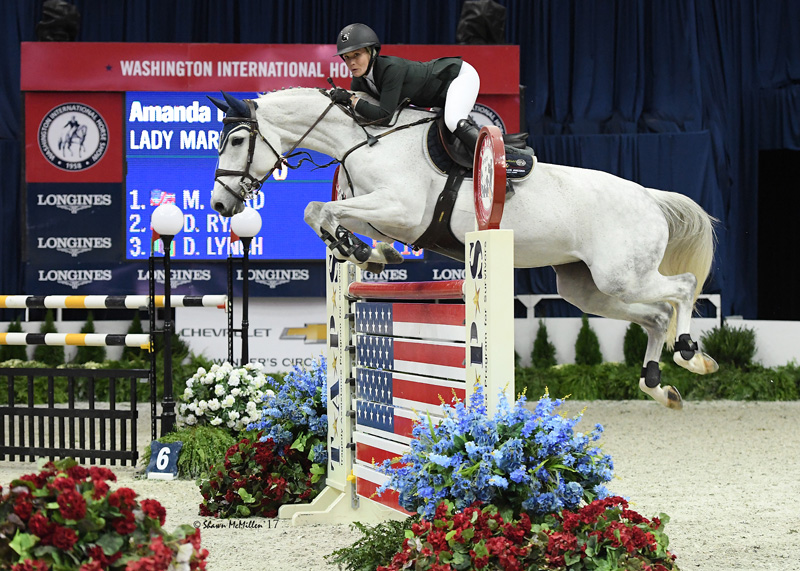 Ward concluded, “He's always been a winner when it counted. He did it again. It’s a little bittersweet, but he doesn't owe us anything.”

The Jump for TAPS Challenge raised $16,000 on Friday night, with every clear over the Tragedy Assistance Program for Survivors (TAPS) fence raising money for the WIHS Official Military Charity. 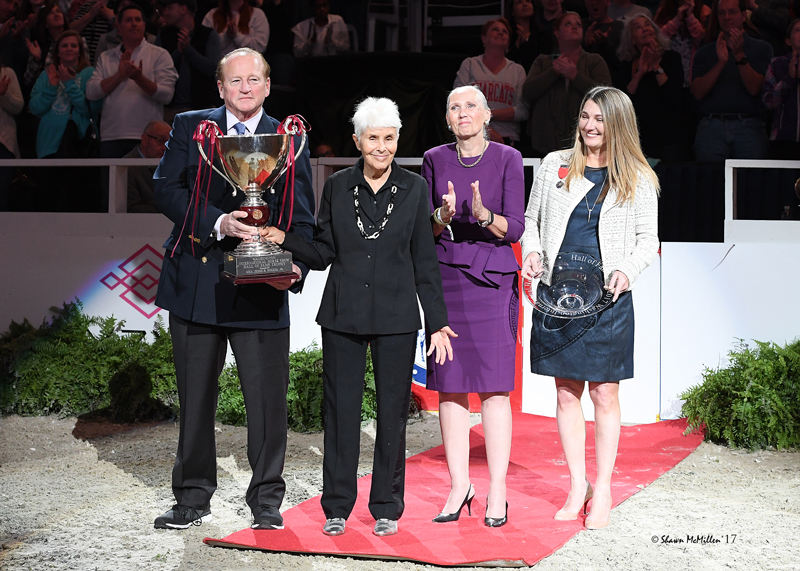 Kathy Kusner was inducted into the Washington International Horse Show Hall of Fame.

Aaron Vale (USA) and Finou earned their second-consecutive WIHS Puissance victory on Friday night, this year clearing 6’7” to take the win in the $25,000 International Jumper Puissance, presented by The Boeing Company.

“It’s the horse,” said Vale on the secret to tying with McLain Ward in 2016 and winning outright in 2017. “This horse actually has quite a bit of talent for this. It feels like he could actually jump a very big wall if the class played out that way. He’s very comfortable at it, and it’d be exciting to try something pretty high with him if it ever happened. My personal best is 7’2 ¼”. If I made higher it than that – that’s pretty high to me.”

The Puissance wall began set at a height of 1.80m (5’11”) and gradually progressed to the 6’7” height through four rounds of competition. Four horse and rider combinations all successfully contested the first round, with Paulo Santana (ESA) being the first eliminated after failing to clear the wall in the second round with his mount Una du Keske Z, owned by Santana Stables LLC.

Finishing in third were Kama Godek (USA) and her own De Grande. Following Godek and De Grande’s elimination in the third round, only Vale and Hunter Holloway (USA) aboard Cassevel, owned by Hays Investment Corp., remained, and Holloway elected to save the gelding jumps for another day, opting out of the fourth round. Vale could have chosen to also call it a night and accept a tie, but much to the enjoyment of the crowd, he chose to return for a fourth and final round. 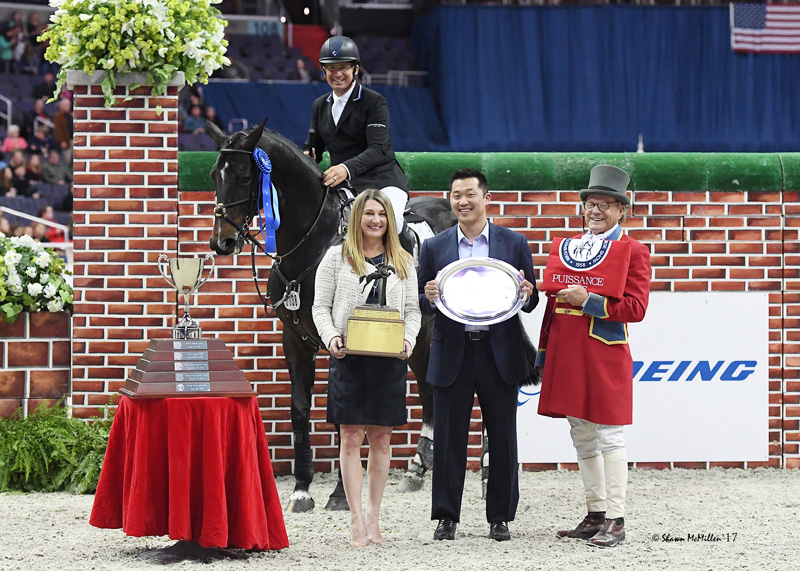 Aaron Vale was presented as the winner of the $25,000 International Jumper Puissance by Jason Pak (pictured center), the program lead for Boeing’s Veteran Outreach and Engagement efforts in the Potomac Region supporting military veterans and their families and a proud combat veteran of the U.S. Army. Photo by Shawn McMillen Photography

“We’ve got a big crowd here today, number one,” Vale said on his reasoning for choosing to return. “Number two, my horse actually is a very fresh horse, so he needs work. He’ll be jumping the grand prix tomorrow night. Last year he jumped five rounds, and then he jumped clean in the grand prix, so four rounds might not have been enough work for him! Maybe I should have come back one more time!”

The 2017 WIHS Grand Junior Hunter Championship and the Ides of March Perpetual Trophy, donated by Linda Lee and Lee Reynolds and given to the grand championship winner, were presented to Emma Kurtz of Hudson, OH, and Dedication, owned by Dr. Betsee Parker.

On their way to winning the grand championship, Kurtz and Dedication, a 12-year-old bay Holsteiner gelding (by Casado), earned two firsts and a third over fences to take the Large Junior 16-17 Hunter Championship and the Chance Step Perpetual Trophy, presented by Chansonette Farms and donated by Brooke Carmichael- McMurray-Fowler and Pam Carmichael Keenan. The division reserve championship went to MTM Hands Down, ridden by Annabel Revers of Weston, MA, and owned by Beechwood Stables LLC. 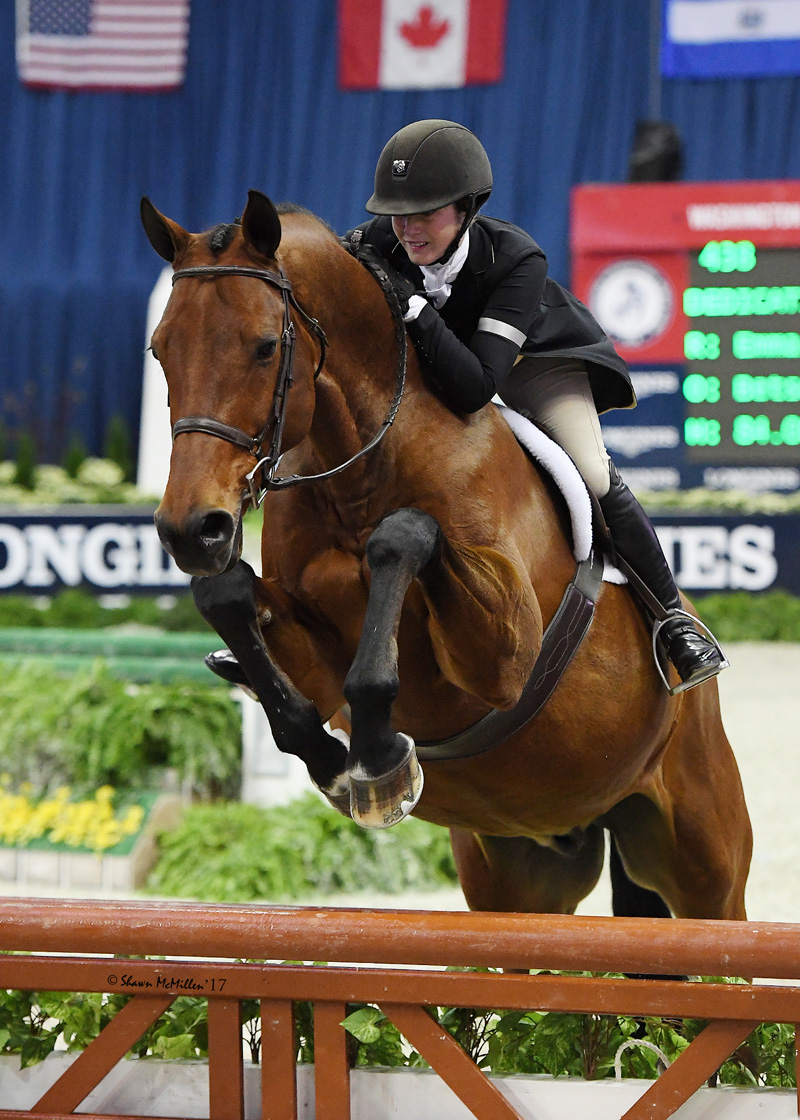 At the 2016 WIHS, Kurtz rode Wisdom, owned by Rivers Edge, to the Small Junior 15 & Under Hunter championship, but this year marked her first time claiming the WIHS Grand Junior Hunter Championship.

“It’s amazing [to win here],” said Kurtz of Hudson, OH. “For [Dedication] to come in here and be bombproof is awesome.”

Kurtz, 16, acquired the ride on Dedication in mid-2016 and has made winning on the gelding look easy ever since, but the 17-hand gelding has his quirks.

“He's a little funny about his leads. We never practice lead changes at home, so that he doesn't get nervous for them,” Kurtz explained “He's also particular about the way you hold your body over the jump. You have to give him enough time off the ground, but bend over enough the he doesn't hit it behind. It's a formula for sure.

“But he jumps amazing. He’s beautiful, he’s a good mover; he’s the whole package,” said Kurtz. “We love him.” 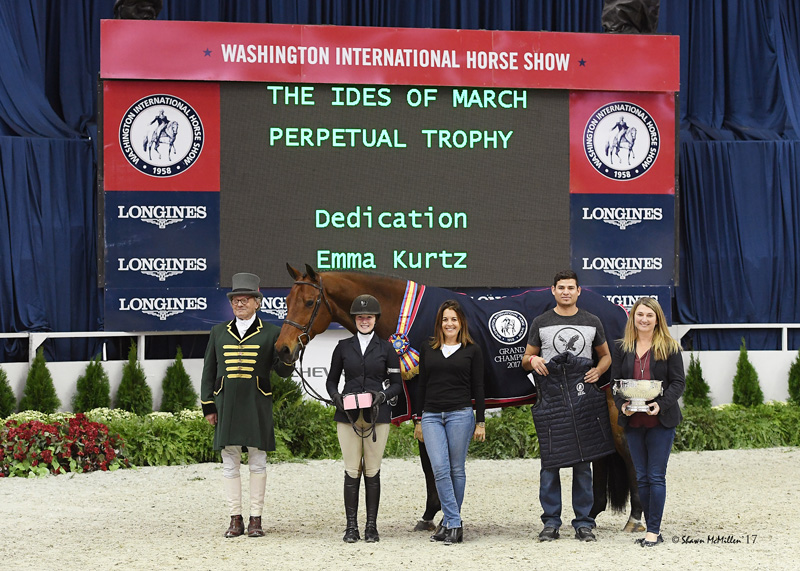 In the Small Junior 16-17 Hunters, sponsored by the Wasserman Foundation, the championship went to Annabel Revers and Kingpin, owned by Beechwood Stables. The reserve championship was awarded to Haley Redifer of Barboursville, VA, and her own Linus.

In the Large Junior 15 & Under Hunter division, it was Augusta Iwasaki of Calabasas, CA, who claimed the championship aboard Small Affair, owned by Lyn Pedersen. For her performances and display of horsemanship and sportsmanship, Iwasaki was selected as the Best Child Rider on a Horse, sponsored by Gotham North, and she was presented with the DiVecchia Perpetual Trophy, donated by Mr. and Mrs. Mark DiVecchia, for the win. 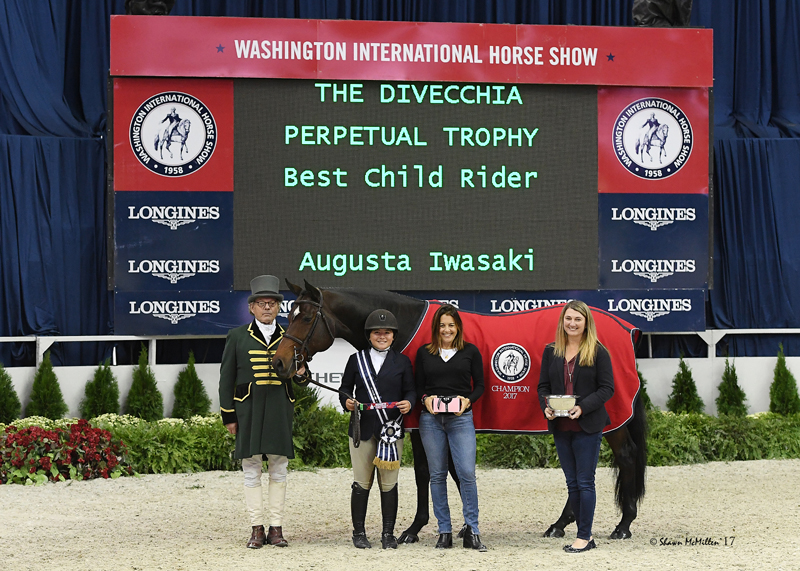 “It’s really exciting,” said Iwasaki, 13, of her win. “It’s very exciting to come into the city. I think it’s just so different and so cool because when do you get to drive into a city and just show on the streets?”

Taking the reserve championship in the Large Junior 15 & Under Hunters were Brooke Morin of Calabasas, CA, and Seaside, owned by Strasburg Morin Inc.

The Lindsay Maxwell Charitable Fund WIHS Equitation Finals also kicked off on Friday, and Ava Stearns currently sits at the top of the leaderboard with a score of 89 in the hunter phase. Sam Walker, Alexandra Worthington, Annabel Revers, Haley Redifer, and McKayla Langmeier round out the top six riders, consecutively, heading into Saturday’s jumper phase. The hunter and jumper scores will then be averaged to determine the top ten riders who will then participate in the final work-off phase.