WASHINGTON - October 24, 2017 – The 2017 Washington International Horse Show (WIHS) kicked off on Tuesday, October 24, at the Capital One Arena in downtown Washington, D.C. and continues through Sunday, October 29. The opening day of competition featured the start of professional and amateur hunter divisions, as well as year-end championships for child and adult hunter riders.

Kubiak and her horse Memorable, owned by Over Fences Farm LLC, were one of 32 entries in the $10,000 WIHS Children’s Hunter Championships, and they shot straight to the top of the leaderboard with a first round score of 86. The top 12 riders returned in reverse order of their standings for a second round, and Kubiak and Memorable cemented their win with a second-round score of 76.5 for a 162.5 total. Kubiak, 16, was presented with the H. Fenwick Kollock Memorial Perpetual Trophy, donated by Friends of Fen, for her win.

Finishing in second were Annalise Manoog of Centerville, MA, and Boccaccio, owned by Nicole Manoog, with a 161 total score. Angelina Dileo of Milltown, NJ, and her own As Good As It’s Get, rounded out the top three on a score of 160.

“Honestly, it’s little bit surreal [to win here],” said Kubiak, whose appearance at the 2017 horse show marks her first time competing at WIHS. “I’ve been here before with my sister to watch, but it’s amazing to finally be able to ride here and be out in the ring. It’s awesome.”

Kubiak has had her winning mount, a nine-year-old warmblood gelding, for five years, and she has brought him up the ranks alongside her trainers Maria Rasmussen and Jeff Wirthman. 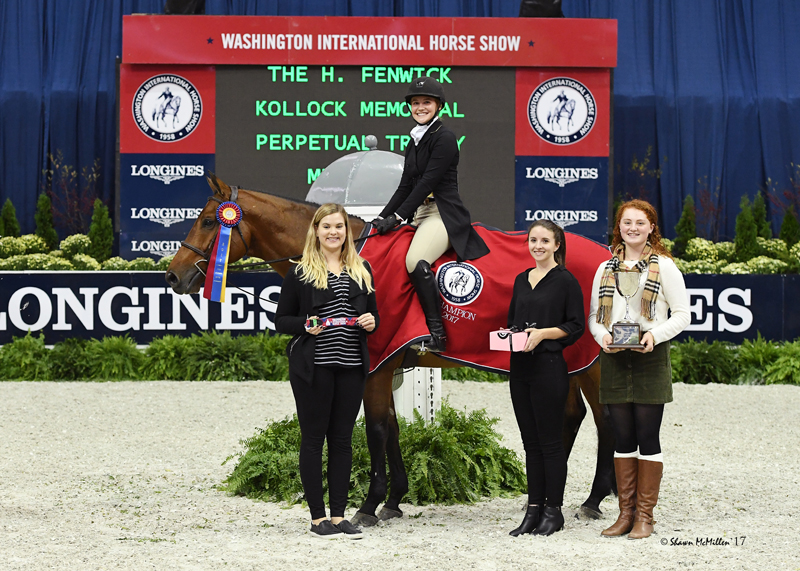 “It’s amazing to finally be at this point with him and really succeeding because I’ve been working really hard since he was a baby,” said Kubiak. “I have a hard time being nervous with ‘Mo’ because he’s such a good boy. Going into it, I just was a little bit anxious because I wanted to do well, but he always takes care of me. I just had to remember to trust my horse, and ride my plan that I made with my trainers.”

The $10,000 WIHS Adult Hunter Championships concluded the first day of the 2017 WIHS, with Jef Lauwers and Sutherland, owned by Peter Pletcher, taking the victory from amongst a field of 29 entries. Lauwers and the 11-year-old Oldenburg gelding (by Sir Donnerhall) earned a high score of 86 in the first round, and when the top 12 returned for a second round, it was again Lauwers and Sutherland who topped the leaderboard, this time with a score of 87. Their 173 total score made them the clear front-runners while Neysa Bryant of Smithfield, VA, and Son of a Sailor, owned by Emma Fass, finished in second with a score of 167, and Kendall Meijer of Grand Rapids, MI, and Sorrento, owned by Copper Fox LLC, took third with a 166 score. For his win, Lauwers was presented with the Diana Wade Memorial Award. 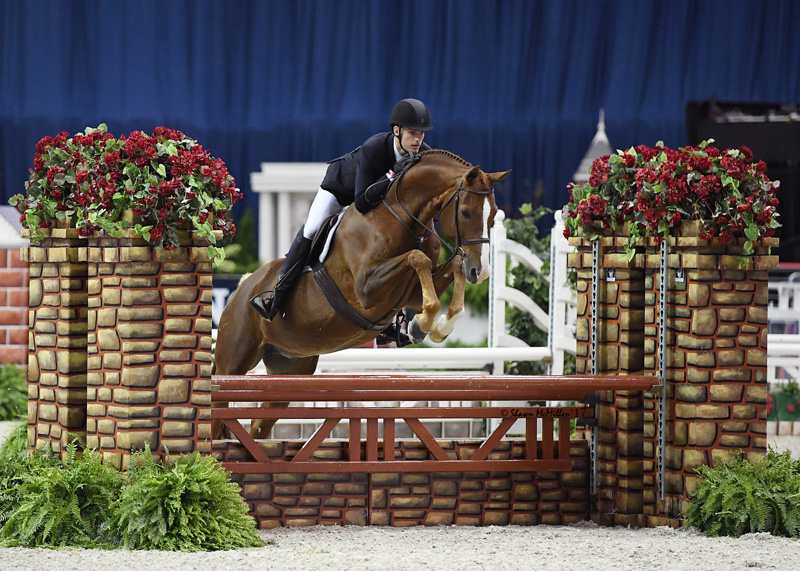 Lauwers is a relative newcomer to the hunter ring, having just started competing in the division last January after meeting Pletcher and coming to the U.S. from Belgium, but he has already earned championship accolades with Sutherland at the Capital Challenge Horse Show and the Pennsylvania National Horse Show.

“[Washington] is so much different than the other horse shows, and I’m really glad that they do a horse show like this because it brings back the prestige of the horse show,” said Lauwers following his victory, earned during his very first visit to the nation’s capital. You feel like you’re in a jumper show, but you’re doing the hunters.”

Lauwers, who has been riding Sutherland for only a few months, cited his rounds in Tuesday evening’s featured class as some of his smoothest to date with the gelding. 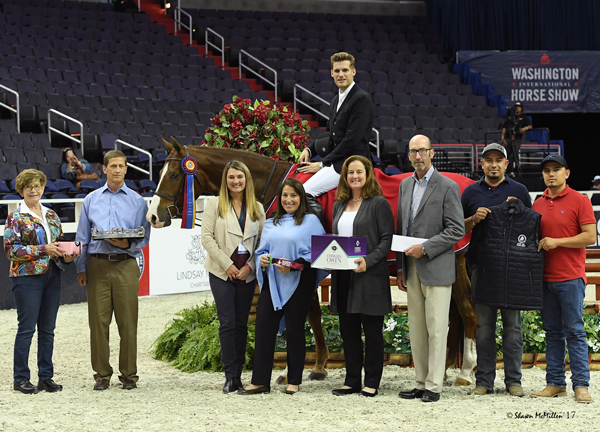 Jef Lauwers and Sutherland, presented as the winners of the $10,000 WIHS Adult Hunter Championships. Photo by Shawn McMillen Photography

“He was perfect,” said Lauwers of Sutherland. “I came out of the turn, and normally I would be patient and wait, but I just saw it coming up, and I was like, ‘Okay, I’m just going to close my leg and go for it.’ I saw Peter [Pletcher] sweating in the background, and I was like, ‘I’ve got this. Just leave this to me!’ It was fun.”

The professional hunter divisions also completed their first day of competition at the Capital One Arena on Tuesday. The Robotyping Challenge Trophy, presented for the best Green Hunter round, was awarded to Wonderly, ridden by Scott Stewart and owned by Dr. Betsee Parker. The Fairfax Hunt Race Association Challenge Trophy for the best Green Hunter handy round was presented to Leslie Steele and Top Shelf, owned by Milissa Summer.