While a car accident isn’t the best way to start a horse show, there was nowhere else to go but up for the then 18-year-old Kathy Kusner.

Kusner “didn’t have a horse, ever,” so the opportunity to catch-ride at WIHS was extremely exciting. “I would be braiding horses and doing anything just to be there. Somebody had a horse for me to ride [at WIHS],” she said. “I was so excited [driving to the show] that I went flying through a red light and was broadsided. It completely ended the car, but I was just so excited to be at these horse shows.”

It was an inauspicious beginning, leading to a storied career for the now 77-year-old legend. With wins as a junior, contributions to the U.S. Nations’ Cup teams, and a victory in the President’s Cup Grand Prix at the Washington International Horse Show, Kusner was at the top of the sport for decades. WIHS honors her this year with induction into the WIHS Hall of Fame. 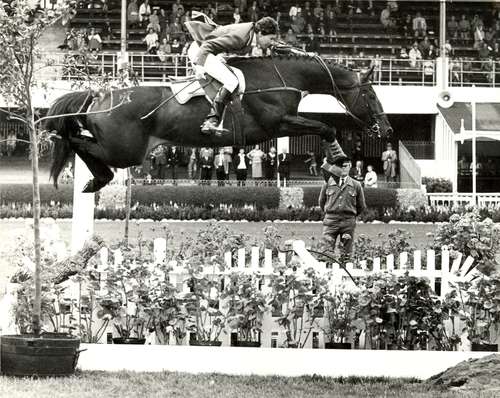 Born in Gainesville, Fla., Kusner made her way into the sport at a young age with a natural affinity for horses. She did not come from a family of horsemen though, and had to work in order to be able to ride.

At the very first Washington International Horse Show in 1958, she competed on a hunt team and won the Fairfax Junior Hunt Challenge Trophy with fellow Hall of Fame inductee Betty (Reynolds) Oare.

“That was a highlight for me,” Kusner said. “I remember it because it was so much fun for Betty.”

Kusner took her experience of catch-riding horses throughout her junior years into her professional career. In the same year she first competed at WIHS, Kusner was invited to her first United States Equestrian Team (USET) trials. In her second year competing for the USET, she won the President’s Cup Grand Prix in 1962 riding Unusual.

Kusner and Unusual had only competed in the green jumper division, winning the dvision championship just a week earlier at the Pennsylvania National Horse Show. But that experience and Kusner’s faith in the talented horse led the U.S. to use Unusual on the team in the international division at WIHS, and win one of the most prestigious grand prix competitions in the country.

“I got on the team, and I really thought Unusual would absolutely rise to the occasion because he was a really good horse,” Kusner recalled. “It meant everything [to win] at that time. He was just a wonderful horse.”

Another of Kusner’s fondest memories of competing at WIHS includes winning the high-jump “Sky High” competition. Riding for horse dealer Joe Snyder at the time, Kusner was presented with a “shaggy, badly-clipped horse out of a field,” but it was believed that the mare had experience competing with the Canadian show jumping team. They schooled at home a handful of times and went off to WIHS. Snyder named her “Sky High” after the class. Kusner and the unassuming mare proceeded to enter and win the competition at a height of 6’7”.

Kusner went on to compete in three Olympic Games (1964, Tokyo; 1968, Mexico City; and 1972,  Munich, taking home the team silver medal in 1972 as the first American woman to win an Olympic medal in equestrian sport. Along with Mary Mairs Chapot, she became the first woman to represent the United States at the Olympics in show jumping. She helped the U.S. win team gold (again with Unusual) and silver medals in two Pan American Games and individually, Kusner finished as the runner-up in the first World Championships in 1965. She was twice named the leading rider at the National Horse Show in Madison Square Garden, and her international wins include the Grand Prix of Dublin (twice); the French Championship in La Baule; the Pre-Olympic Grand Prix of Rotterdam; the Puissance in Aachen (twice); the Grand Prix of Hickstead, England; and more.

Kusner was inducted into the Show Jumping Hall of Fame in 1990, was named one of the most influential horsemen of the 20th century by The Chronicle of the Horse and The American Horse Shows Association, and received the United States Equestrian Federation Pegasus Medal of Honor in 2005.

Concurrent to her show jumping career, Kusner embarked on the chance to be a jockey. She mounted a successful legal case to become the first licensed female jockey in the United States in 1968. She was also the first woman to ride in the Maryland Hunt Cup, the toughest timber race in the world, in spite of its board trying to keep her from riding in the race.

Kusner remembered, “The night before [the Maryland Hunt Cup race], they tried to stop me from riding. One of the members of the board of directors was somebody I knew. He said, ‘You can’t stop her; she has a jock’s license.’ I was glad he was there!”

“You can’t stop her” became a theme in Kusner’s life, whether it was in the equestrian industry, in the air, under the sea, on the road, or in philanthropy. 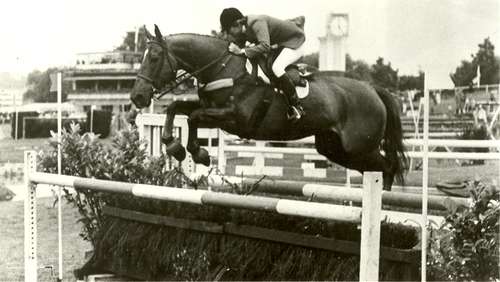 Kusner is a licensed pilot and became the first woman to work as a Lear Jet pilot for Executive Jet Aviation, then the largest air charter company in the world; she is an experienced scuba diver; she has completed 123 marathons and 73 ultramarathons; and she is the founder and chairman of the board of Horses In The Hood, a non-profit organization benefiting the inner-city community by providing lessons that teach skills and values associated with the care and riding of horses.

Kusner started Horses In The Hood Los Angeles in 1999. The non-profit program works with groups and organizations in low income, mostly African-American and Latino, communities in Watts and Compton in South Central Los Angeles. As of 2016, more than 1,057 at-risk children and adults participated in 105 horse camps.

For her work with Horses In The Hood, she was inducted into the World Sports Humanitarian Hall of Fame and is a recipient of the John Henry “Pop” Lloyd Humanitarian award.

Kusner has worked as a horse expert witness since 1983, where she testifies on horse-related accident analysis and reconstruction. She continues to be involved in the world of horses by giving clinics on riding, training, and competing in the U.S., Japan, New Zealand, Guatemala, Iran, Paraguay, and South Africa, just to name a few of the countries where her expertise has been welcomed.

Washington International Horse Show is thrilled and proud to have Kathy Kusner join the family of equestrians in the WIHS Hall of Fame.