Throughout the past several months, Alan Wade of Tipperary, Ireland, has been crafting one of the most important elements of the 2017 Washington International Horse Show. From formative sketches and drawings that begin with pencil and paper, Wade will meticulously design the jumper courses for WIHS horses and riders.

Returning to WIHS for the second consecutive year, Wade has become a popular course designer in North America recently and has built at shows such as the Winter Equestrian Festival in Wellington, Fla., American Gold Cup at Old Salem Farm in North Salem, N.Y., as well as the coveted 2017 FEI World CupTM Jumping Final in Omaha, Neb. 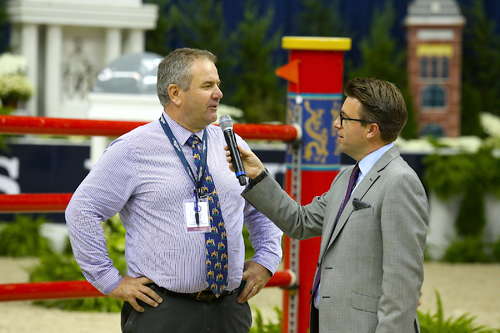 While his designs are revered by riders, it’s easy to see why his reputation has crossed the Atlantic Ocean and his popularity has grown within North America; he himself is a horseman. Growing up immersed in horse sport, Wade was young when he could be found trailing his father, course designer and international show jumping competitor, Tommy Wade, at horse shows throughout Ireland. With early dreams of one day building a course at the famed Dublin Horse Show, Wade, now 47, has built Dublin on multiple occasions and recently has been tapped to set the tracks for the 2018 FEI World Equestrian Games (WEG) at Tryon International Equestrian Center in Tryon, N.C.

“Being able to travel the world doing what I love is the most rewarding of all experiences,” said Wade, who balances his time on the road with essential family time with his wife, Anne Marie, and their two daughters, Sarah, 16, and Marian, 14. “I have experienced so many incredible things through course designing, but coming home to them is still the best feeling.”

We caught up with Wade as he prepares to make his way to the U.S. capital city and asked him the following questions:

What was your inspiration to become a course designer?

We only have one five-star show in Ireland and that is the Dublin Horse Show. Building there was the dream. After I did that, the rest of this was just all very exciting icing on the cake. Also through my involvement at Dublin, I was lucky enough to gain experience by working with basically every major international course designer in the world. I worked with the likes of Linda Allen (USA), Frank Rothenberger (Germany), and Bob Ellis (UK) when I was first starting out and they were the ones who helped me make it to some of the top horse shows, international events, and even Olympic Games. For me, the highlights of my career are about building up experience and camaraderie with my fellow course designers.

What is your proudest moment so far?

The World Cup Final in Omaha (March 2017) is, without a doubt, my proudest, most memorable moment as a course designer. It still puts a smile on my face now just thinking about it. What a great few days of sport.

How would you characterize your course design philosophy?

I try and build for whoever is the best on that day and vary the tests so, at the end, you have a true champion that mastered short, long, tall, and wide.

I normally build very simple lines, and a lot of the times many riders don’t pay attention to the simplicity of those lines. If you build to the height, the simplicity of the lines sometimes gets a bit more complicated. A foot less in this line and a foot extra in that line over the course of 14 fences can make a big difference. The other major thing is, if you have the ability to put different types of fences, delicate ones or something a bit bolder, that is the tipping point between a normal course and that extra-special 1.60m course.

I think the best advice I can give to someone jumping one of my courses is to find a horse with the whole package; a horse with scope and bravery, a horse that is careful, a horse that is able to shorten and lengthen stride, and a horse with fight. The more I get to see the top level, the more I notice that the one thing that top horses have is the fight and will to win. The most important part of my principles is to understand horses. I am not afraid to build big and difficult, but I never want to build traps for any horse. At the end of the day, my job is also to look after these horses.

WIHS includes a Puissance. What is your experience setting that event?

I have built Puissance courses numerous times in Dublin, and it is such a great class for the crowd. The general public understands a Puissance; the one who jumps the highest wins. Every show needs spectators in the seats to create an atmosphere, and a Puissance is always a class that accomplishes that. I can’t wait to build the Puissance again at WIHS, and I am hoping for a good group of horses and riders to turn up!

What is special or different about designing for WIHS?

What is most special about designing at WIHS this year is the new surface. Footing is one of the most important pieces of what I do because if the footing is not suitable for the horses, it does not matter what I build. I am very excited about working with the new material that is being brought in this year. The WIHS ring is long and narrow and it reminds me a lot of Olympia in London, which I designed a couple years ago. To get width and build across the ring is sometimes quite difficult in those places, but I’ll still stick to my style of simple lines.

In general, the WIHS ring has such presence with an amazing good crowd, which creates a great atmosphere. I believe that draws a better performance out of the athletes, both horses and riders. As a course designer, I feel the energy from the crowd and it keeps me on my game. That energy also reminds me that I truly love course designing, and I try to give it my all whether it’s for the grand prix at WIHS or a 1.10m at a local horse show.