SHARE
WASHINGTON, August 2, 2017--The Washington International Horse Show (WIHS), one of the most prestigious and entertaining equestrian events in North America, is pleased to announce nominations are now being accepted for the Fifth Annual WIHS Klinger Perpetual Award for Honor & Service, presented by EQUUS Foundation, The Stephens Family, American Horse Council and Centaur.
The award recognizes a horse, individual, or organization that best demonstrates the values of honor and service as embodied by Klinger, a special horse who has touched the lives of many in his life of service with the 3rd U.S. Infantry Regiment (The Old Guard) Caisson Platoon.
At The Old Guard, Klinger performs solemn duties as a funeral escort bringing departed military members to their final resting spot at Arlington National Cemetery, and serves as the official escort to the President of the United States and has led the Presidential Inaugural Parade.
Beyond his official duties, Klinger brings comfort to veterans and families of our fallen heroes in his role as a Tragedy Assistance Program for Survivors (TAPS) Ambassador and he has been an important part of WIHS for many years - visiting with children on WIHS Kids' Day and participating in the Caisson Platoon Exhibition on WIHS Military Night. It is both fitting and a great honor that WIHS should salute him through this special award program. 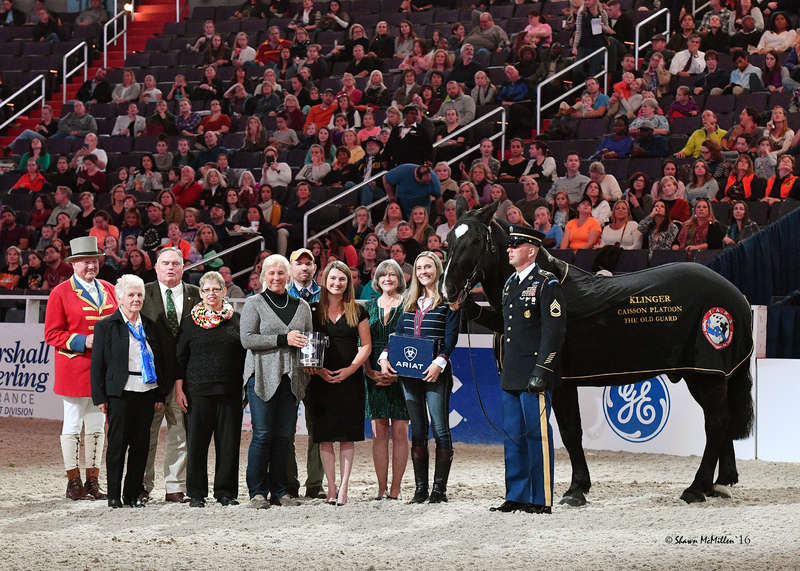 John E. Franzreb III, Beverly Raymond, Jim Steele, Kathleen Tabor, Esq., Karen Fulton,
Ross Peddicord,Vicki Lowell, Lynn Coakley, Alison Borris & Klinger with SFC Jeffery Tyree.
Photo: Shawn McMillen Photography.
The 2017 Klinger Award recipient will be recognized during a presentation at center ring with Klinger and representatives of the Caisson Platoon, WIHS, EQUUS Foundation and the American Horse Council on Friday, October 27, during the annual WIHS Military Night. The recipient will receive prizes courtesy of American Horse Council and Centaur and will have the opportunity to select an equine charity on EQUUS Foundation's Equine Welfare Network to receive a $500 grant matched by a $500 donation from The Stephens Family.
Last year's award recipient was the Maryland Horse Discovery Center Network. Under the leadership of the Maryland Horse Industry Board Chair, Jim Steele, the Horse Discovery Center Network was established in 2015. "Like the horse, Klinger, the goal is to showcase the best of the horse world, give the public the opportunity to enjoy these wonderful animals and help our industry prosper and grow," said Maryland Horse Industry Board Executive Director Ross Peddicord.
Nomination forms are available at WIHS  Klinger Award Nomination Form. All nominations must be received by Friday, September 15, 2017. Learn more at www.wihs.org/klinger-award.

To nominate a special horse, individual or organization for this award, please complete and return the nomination form to info@wihs.org or by mail to: Washington International Horse Show, Attention: Klinger Award, 3299 K Street NW, Suite 600, Washington, DC 20007. For more information, please contact the WIHS Office at 202-525-3679 or info@wihs.org. Learn more about Klinger and the WIHS Klinger Perpetual Award for Honor and Service.
About Washington International Horse Show
Established in 1958, the Washington International Horse Show is one of North America's most prestigious and entertaining equestrian events attracting more than 26,000 spectators annually to Washington, D.C., for Olympic-level competition plus community and charity events. More than 500 top horses and riders arrive from all over the globe to jump for more than a half a million dollars in prize money. Highlights include the $130,000 Longines FEI World Cup™ Jumping Washington for the President's Cup, presented by Events DC, the $25,000 Puissance high jump, presented by The Boeing Company, the $50,000 Speed Final on Military Night, and Kids' Day, a free, fun and educational community event. WIHS, an official USEF Heritage Competition, is rated CSI4*-W by the Fédération Equestre Internationale, the world governing body for horse sports. The Washington International Horse Show Association, Ltd. is a 501(c)(3) nonprofit charitable organization based in Washington, D.C. Visit us at www.wihs.org.

The EQUUS Foundation, a 501(c)(3) public charity established in 2002, also known as Horse Charities of America, the only national animal welfare charity in the United States dedicated solely to horse welfare and the horse-human bond. Donations are tax-deductible to the full extent of the law. Contact the EQUUS Foundation, Inc., at 168 Long Lots Road, Westport, CT 06880, (203) 259-1550, mail@equusfoundation.org,  www.equusfoundation.org.