WIHS continues through Sunday, Oct. 30, featuring hunter, jumper, and equitation highlights. The entire competition at WIHS is live streamed, so don't miss a minute - go to www.wihs.org to watch! 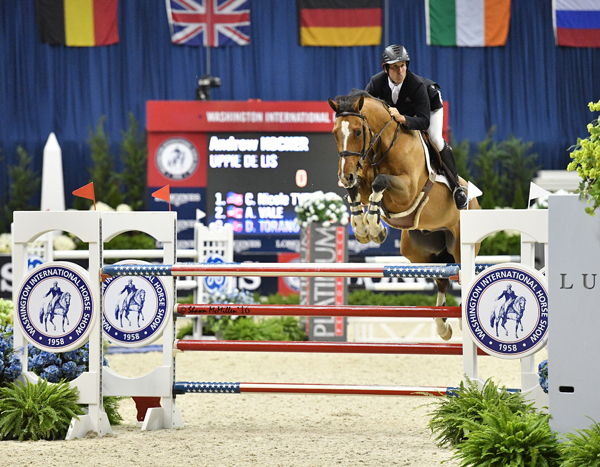 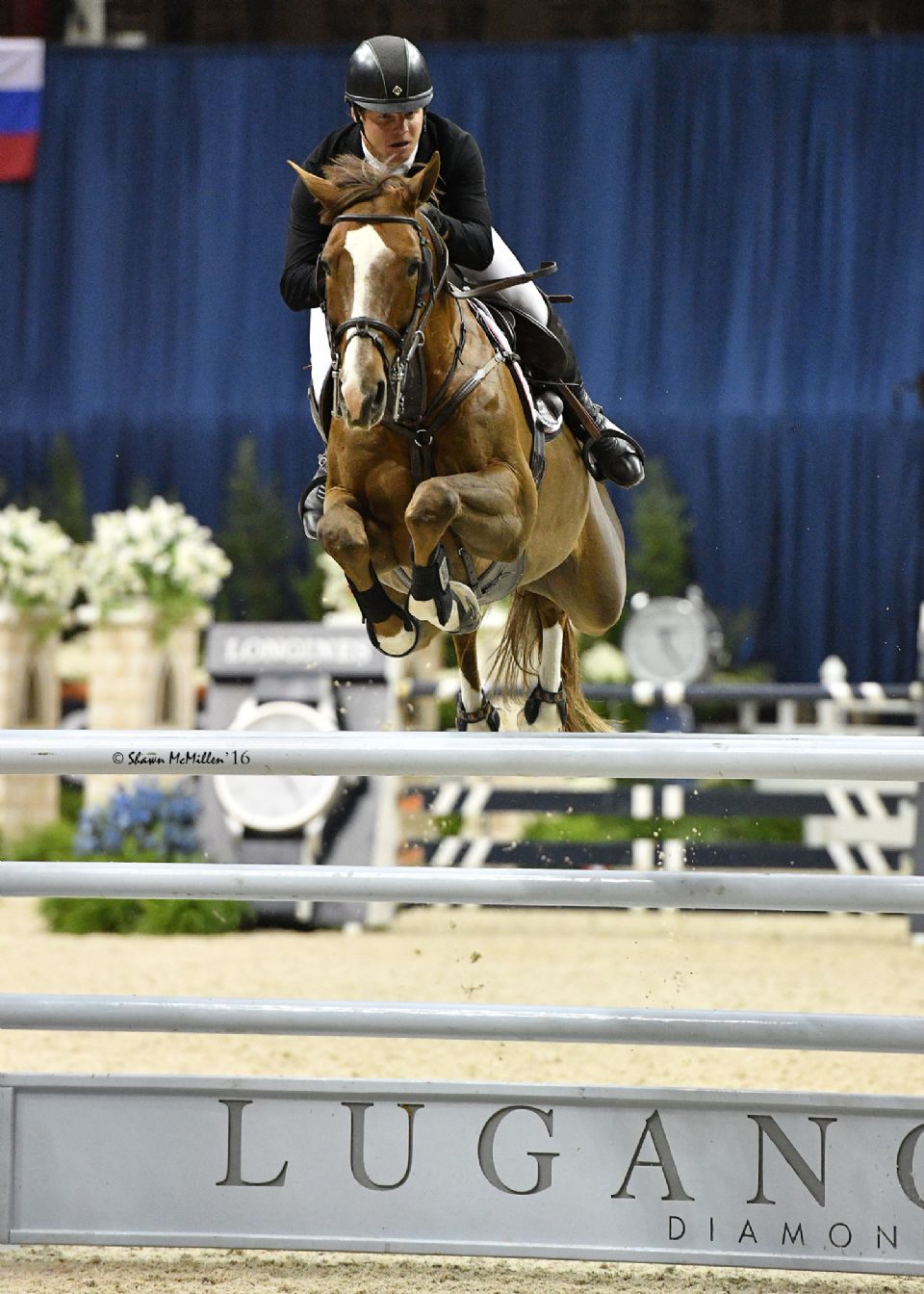 Wednesday’s class marked Kocher’s first win at WIHS. He has shown at the competition in the junior jumpers and hunters, as well as jumping in the Puissance class twice, but explained that he never did the bigger open classes. This week he came to WIHS to jump Saturday’s $130,000 Longines FEI World Cup™ Jumping Washington, presented by Events DC, as he hopes to qualify for the Longines FEI World Cup Finals in March with Uppie de Lis.

“He is my most consistent horse, and I came to do the World Cup class, so I’m excited,” Kocher detailed. “I have been resting him for three or four weeks now just to have him fresh for this, and then we’ll go to Kentucky. He jumped really nice in Omaha in the spring, which is a ring like this. He is actually good in every ring. He is a very solid horse. 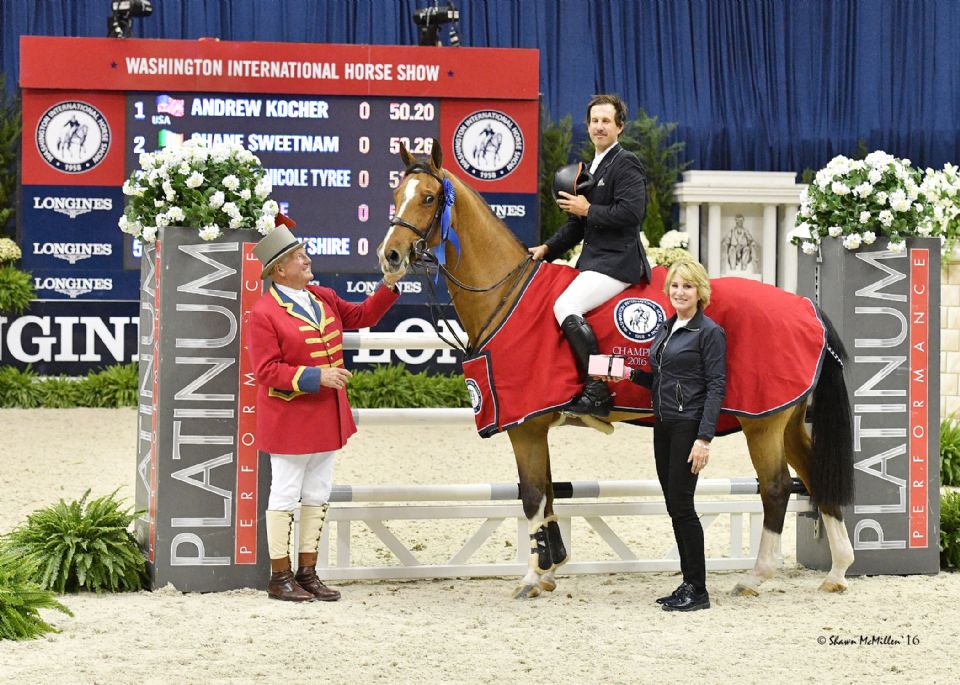 Andrew Kocher and Uppie de Lis in their winning presentation.

“He has a little bit of a choppy stride, so he is good at adding one in here or there,” Kocher continued. “I’m better off to add a stride and make a short turn than leave one out and gallop around. Today, my plan was just to go as fast as I can and not knock anything down. I used to just try to win every class on him, and then I just tried to aim him for bigger classes and he jumped less clear rounds that way, so I’m just going to try to win every class on him again no matter what the table (format) is.”

In addition to Uppie de Lis, Kocher has a young mare named Ciana that will jump in the speed class on Saturday, as well as a mare named C'Havinia that will jump Friday night’s Puissance. She recently tied for first place in the $50,000 Puissance at the Central Park Horse Show, so Kocher hopes that the experience will help their attempt at the wall this week. Uppie de Lis will jump again tomorrow and then rest for Saturday night’s big event.

Jumper competition got underway early Wednesday evening with a win for 16-year-old Sarah Boston of Owings Mills, MD, riding Herminas in the $10,000 WIHS Children’s Jumper Championship, presented by The Klein Family & Lance Williamson Stables. The competition saw 31 entries, with 17 advancing to the jump-off and four double clear rounds. With the fastest second round in 30.51 seconds, Boston and the 13-year-old Trakehner gelding (by Viskis) earned the H. Fenwick Kollock Memorial Perpetual Trophy, donated by Friends of Fen. 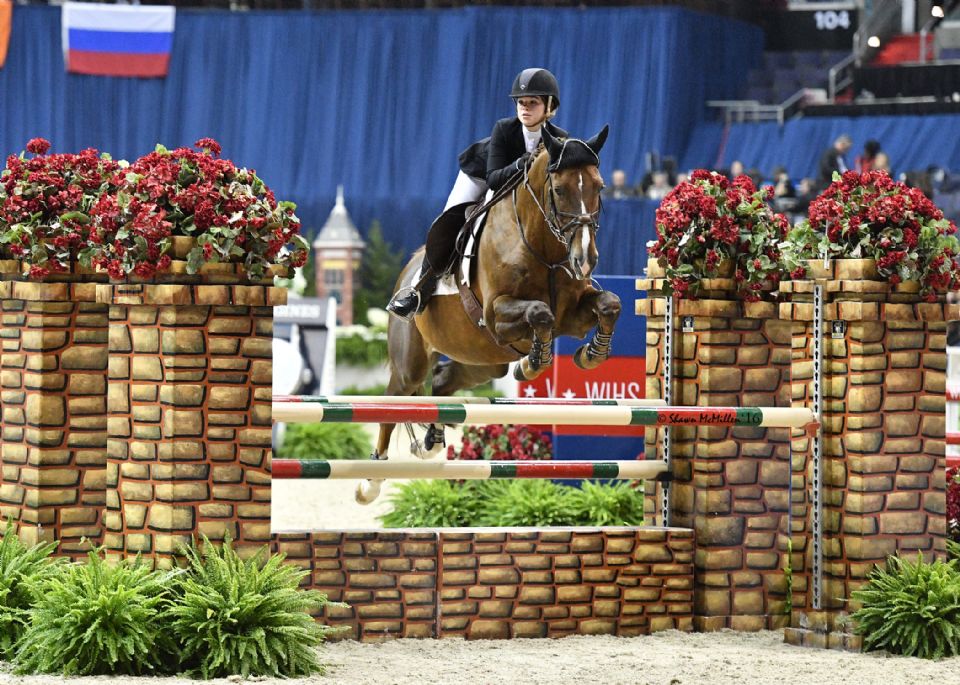 Boston leased Herminas from trainer Don Stewart in February this year and has had a great season with the gelding leading up to her qualification to compete at WIHS.

“It is really awesome just to know that all of the hard work paid off finally,” Boston said of her win. “My horse was really good. He’s perfect. He is just willing to do anything.

“He is pretty go with the flow,” Boston detailed of the ride on Herminas. “He is sassy sometimes, but he will literally do whatever I ask him. He has the heart of a mare, which is nice. He really wants to win, and he really likes his job. He cares about me, and he always tries his best.” 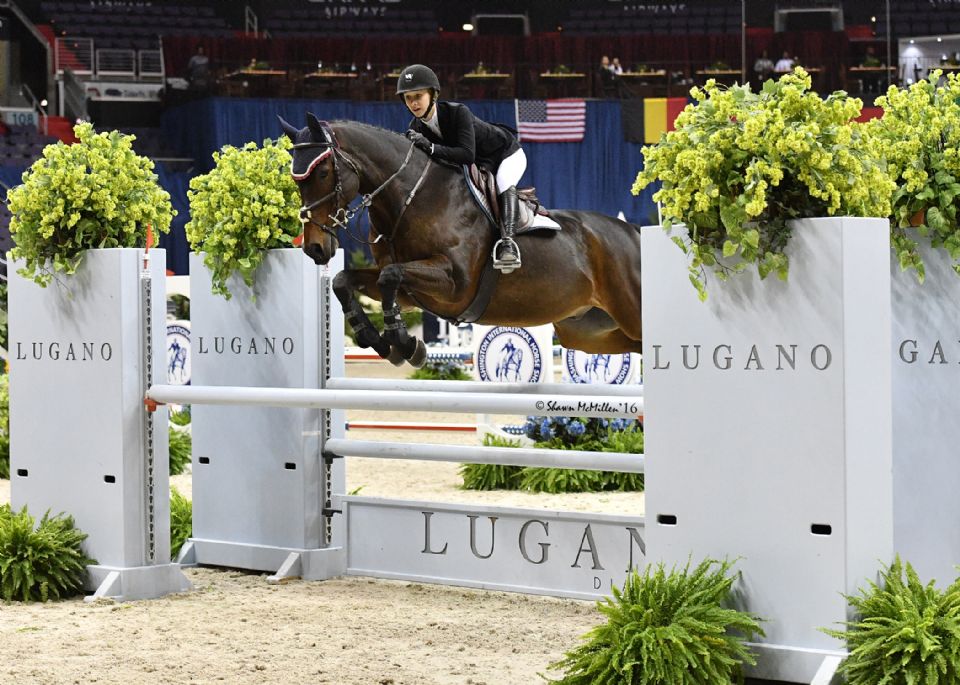 Boston has shown at WIHS before in the ponies, but this was her first time in a few years and a different experience doing the jumpers on a horse.

“It is one of my favorite shows,” Boston stated. “I just love being in the city. I think it is really cool because it is different from all of them, but this is definitely different from doing the little ponies in the ring.” 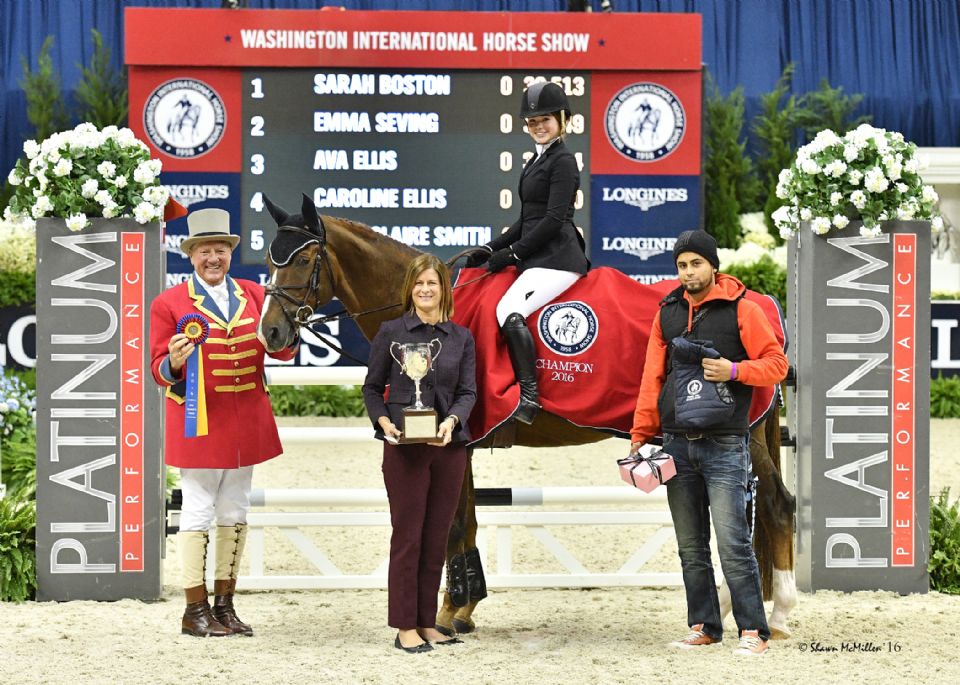 Sarah Boston and Herminas in their winning presentation.

Speaking of her jump-off, the rider detailed, “The plan was to not go too fast because there were only three or four clear ahead of me. But I still had to just continue and be smooth and try to be clear, but still a little bit forward.”

Boston heads back to school in Baltimore tomorrow. Along with training with Stewart in the winter and summer, she also rides on the varsity equestrian team at McDonogh School training with Streett and Amy Moore. She plans to move up to the Low Junior Jumpers this winter.

The $10,000 WIHS Adult Amateur Jumper Championship, presented by The Treacy Family, was held in the evening session with a win for Dean Dignelli of Katonah, NY, riding Heritage Farm Inc.’s Redefin. Thirty-nine entries started over the first round course, with a five-horse jump-off and two double clear rounds. Dignelli and Redefin, an 18-year-old Dutch Warmblood gelding (by Larino), were the winners in 25.85 seconds. Elizabeth Porath and Redfield Farm’s Tequila Girl placed second in 27.76 seconds. Whitney Lind and Whish LLC’s Wanant placed third with four faults in 27.96 seconds. 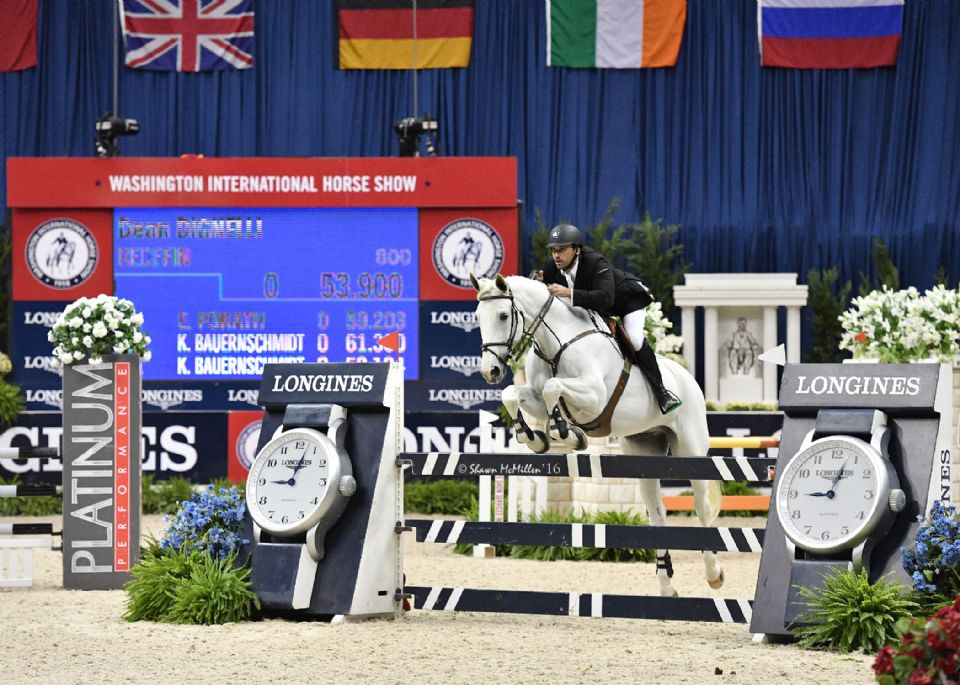 Dignelli began riding three and a half years ago and showed at WIHS for the first time in 2015, finishing a close second in the same class with Redefin. This year, he was determined to get his win. He earned the top prize and will have his name added to the Dorothy Foote “Goodie” Taylor Memorial Perpetual Trophy, donated by Mr. & Mrs. Robert Ashton Hill and Miss Linden Joan Hill.

“Last year I was second. I lost my stirrups after the second jump and completed the whole course,” Dignelli laughed. “I think I was a crowd favorite, and unfortunately I got bumped into second after that, but it was really good.”

Speaking of Redefin, Dignelli detailed, “He is an unbelievable horse. He was Ian Millar’s grand prix horse, and I have created a great bond with him. He really takes care of me, and he wants to win just as bad as I do. As long as I stay out of his way, he shows me the way usually.” 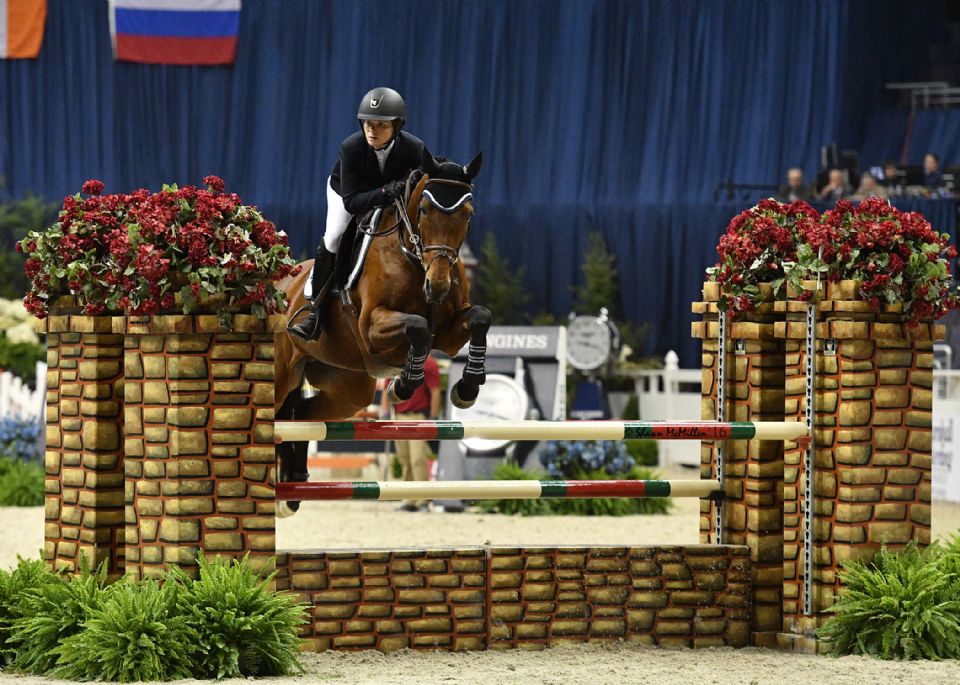 Dignelli (27) is part of a well-known equestrian family, but only recently started riding and joined the family business at Heritage Farm. His uncle, Andre, is one of the top trainers in the country and his father, Michael, is a business partner and important part of the Heritage team. Dignelli chose to pursue his interest in baseball at a younger age, but he eventually came around to equestrian sport and now has his sights set on a grand prix career.

Dignelli has moved up quickly from his first lesson on a lunge line with good friend Matt Metell, to showing at some of the nation’s top competitions in the Adult Jumpers. He has won at the Winter Equestrian Festival, Spruce Meadows, and the Hampton Classic Horse Show, among others. Last week he also won at the Pennsylvania National Horse Show in Harrisburg.

“It has really been a journey. A lot of hard work has been put into it, but I think that what you put in is what you get,” Dignelli said of his motivation. “For how athletic and driven and competitive I am, I really just wanted to prove that I could do this. My whole purpose from that first lesson until now was just to show that I am a Dignelli; it is in my blood, and I can do it. I have tried to get as many lessons as possible. You could come into the indoor in the winter and there would be five ponies and then me and Redefin in a flat lesson with no stirrups. I just really wanted it. My goal was to go up a class every year. That has been sidetracked a little bit, but my goal is to be in the grand prix by 30.”

Though some people might have trouble training with family members, Dignelli appreciates his uncle’s great knowledge and tries to learn as much as he can from the world-class equestrian.

“I think that from playing baseball at a high level, I know what it is like to be coachable,” Dignelli noted. “At first it was a little difficult when Andre was training me, not because he is family, but because he was speaking to me as if I knew what he was talking about! He needed to slow it down for me a little bit, but now it’s good. It was so special to win Harrisburg with Andre there and to win this one with him. He is unbelievable, and his program is unbelievable. I always say that he is like the Derek Jeter of the equestrian world. He is the captain; he is always cool, calm, and collected. He is the man, so I try to be him.” 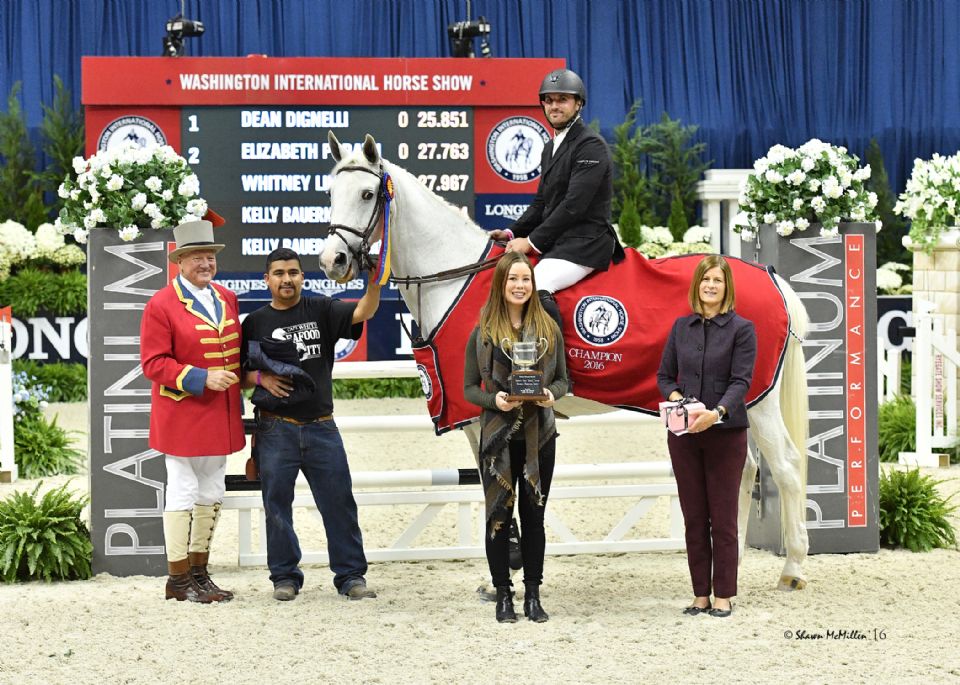 Along with his riding, Dignelli works for the farm doing logistics and transportation. He started a shipping company called Iron Horse Transport and has a golf cart company for sales and rentals called Dean’s Iron Horses. After his win on Wednesday night, he immediately left to drive a truck of horses back to New York. Dignelli is getting to know a new horse and will keep working to move up the ranks.

Jumper competition at the 2016 Washington International Horse Show continues on Thursday with Low and High Junior/Amateur-Owner classes featured in the afternoon, along with a $35,000 International Jumper Welcome Stake. The evening session will welcome local horse lovers, riders, trainers, and their families for Barn Night, presented by Dover Saddlery with the generous support of The Peterson Family Foundation and National Harbor, beginning at 6 p.m. The $35,000 International Jumper Accumulator costume class will be the highlight competition of the evening. For full results, visit www.wihs.org.

About the Washington International Horse Show
Established in 1958, the Washington International Horse Show is one of the most prestigious and entertaining equestrian events in North America. More than 26,000 spectators attend the six-day show, which includes Olympic-level competition along with community and charity events. More than 500 top horses and riders come to D.C. from all over the globe to jump for more than a half a million dollars in prize money. Highlights include the $130,000 Longines FEI World Cup™ Jumping Washington for the President's Cup, presented by Events DC (Saturday night), the $25,000 Puissance high jump presented by The Boeing Company and $50,000 GE Speed Final on Military Night (Friday) and Kids' Day (Saturday), a free, fun and educational community event. The Washington International Horse Show Association, Ltd. is a 501(c)(3) nonprofit charitable organization headquartered in Washington, D.C. WIHS is an official USEF Heritage Competition and is currently ranked #7 in the Top 25 Horse Shows by the North American Riders Group. WIHS is rated CSI4*-W by the Fédération Equestre Internationale, the world governing body for horse sports.