WASHINGTON, Oct. 25--The 2016 Washington International Horse Show (WIHS) began on Tuesday, Oct. 25, with hunter competition at Verizon Center in downtown Washington, D.C. The day featured professional and amateur hunters competing in the first classes of their divisions, as well as year-end championships for child and adult hunter competitors. WIHS features six days of competition through Sunday, Oct. 30, showcasing the best of the hunter, jumper, and equitation disciplines. The competition is live streamed, so don't miss a minute - go to www.wihs.org to watch!

Tuesday’s highlights included the $10,000 WIHS Children's Hunter Championship. Thirty-one entries showed over a first-round course set by Allen Rheinheimer of Zionsville, IN, and the top 12 returned for a second round to determine final results. Kathryn Crenshaw and her own Chapman took the win with scores of 86 and 87 for a 173-point total. Cece Siegfried and her own Finally Found earned scores of 87 and 84 to finish second with a total of 171. Trinity Hammerschmidt and ES Equine Broker LLC’s Spirit scored 170 with a pair of 85-point rounds to finish third. Nicole Dorwart and Lori Dorwart’s Rittani earned the high score of 88 in round one and scored an 81 in round two to finish fourth on 169 points overall. 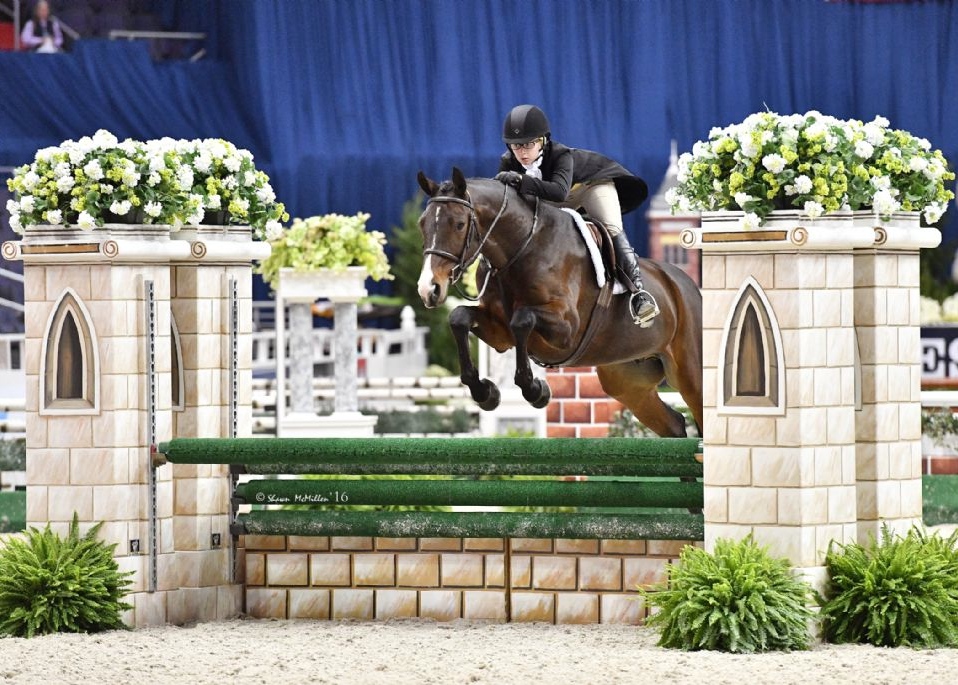 For the win, Crenshaw and Chapman were presented the H. Fenwick Kollock Memorial Perpetual Trophy, donated by Friends of Fen. Crenshaw, a 17-year-old high school senior from York, PA, trains with Chris Gemmill at Woodberry Farm. Her mount is a six-year-old Warmblood gelding (by Contenaro) that she purchased in June 2015.

“This is my first year on Chapman. He is six years old, so he is a baby,” Crenshaw noted. “Winning this is amazing; I can’t even express it. This was my goal for the year. I really wanted to go to this horse show, and just getting here was an honor, much less winning.” 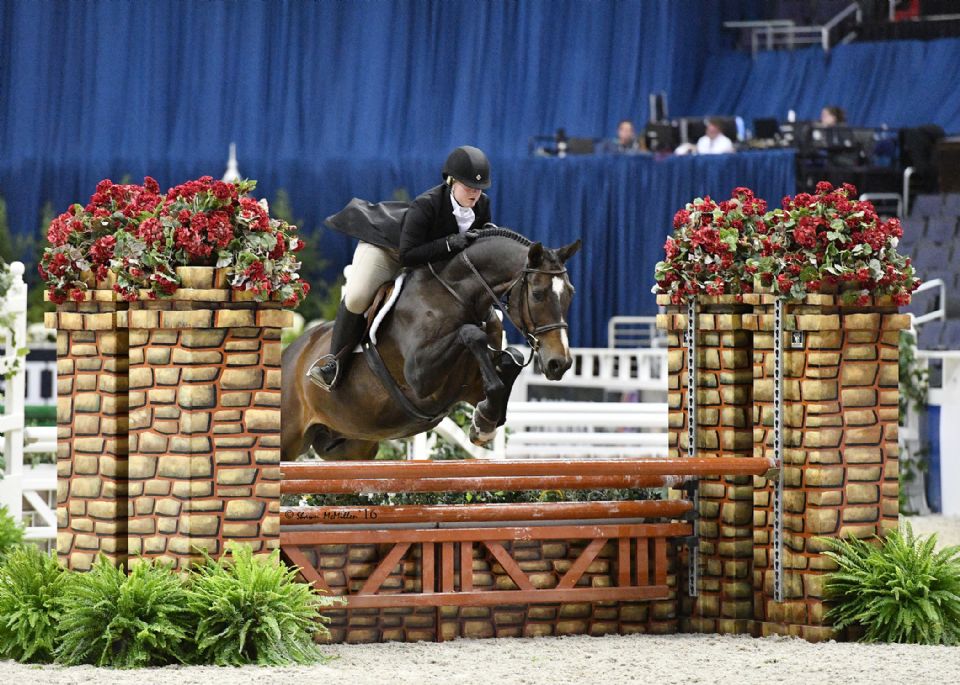 Starting a five-year-old was a big challenge to take on for a young rider, but with the help of her trainer, along with Woodberry Farm’s professional rider Jennifer Marshall, Crenshaw has developed a great young horse.

“I tried a few horses before him, and when I got on, I knew immediately that he was the one,” she stated. “He has grown up so much since he has been in a program. I lesson twice a week with my trainer and he gets a professional ride once a week. The whole journey has been amazing. He walked in here today never even being in that ring before, and he was perfect. I could not ask for anything else.”

Describing Chapman, Crenshaw detailed, “I think he loves this job. He always goes around with his ears up and he is very sweet. He is smooth, point and shoot, but he is also very young. I have to be very direct and set him up for his lead changes. He is really fun to ride; I love him so much. He has been a once in a lifetime horse and I would not take anything for granted.” 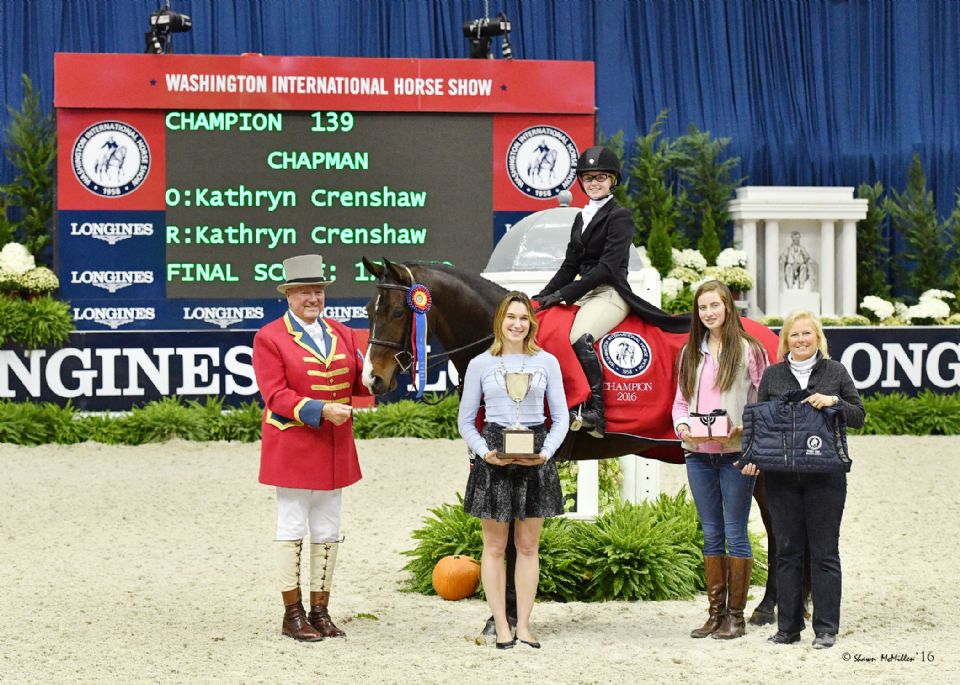 Crenshaw and Chapman showed at Zone 2 Hunter Finals last week and competed in the NAL Children’s Hunter Finals at the Pennsylvania National Horse Show for an eighth place finish the week before. After a wonderful year together, Crenshaw will give Chapman a break before heading into her last year showing as a junior. She plans to head off to college next fall and is not sure what the future holds for her young mount, but hopes that they can continue to compete together.

Third Time is the Charm for Contina and Jacquelyn Maggiore

The $10,000 WIHS Adult Amateur Hunter Championship concluded day one at the 2016 WIHS with 31 entries showing over the first-round course and the top 12 returning. The win went to Jacquelyn Maggiore of Boston, MA, riding her own Contina. Maggiore and the 13-year-old Westphalian mare (by Contini) earned scores of 84 and 82 for the win with a 166-point total. Kendall Meijer and Copper Fox LLC’s Moonwalk finished second with a two-round total of 157.50 (76.5 and 81). Taylor Martinz placed third with scores of 80 and 77 riding Freedom’s Clover, and Dana Nifosi earned scores of 74 and 79 to finish fourth aboard her own Knob Creek. 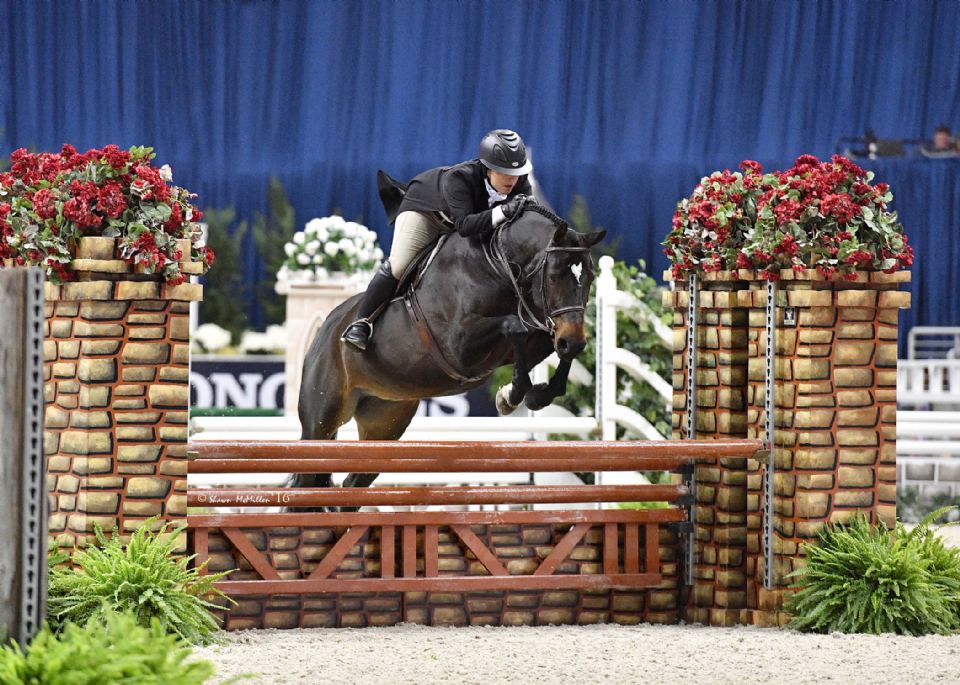 Maggiore has ridden the winning mare, Contina, for six years and made her third trip into the arena at Verizon Center this year for their first victory at WIHS. They finished second their first year in the championship, placed third last year, and Maggiore was determined to come back and get the win in 2016. She trains with Greg Prince and Cookie DeSimone of Woodbridge Farm in Sherborn, MA, and also works full-time in her family’s real estate development business. 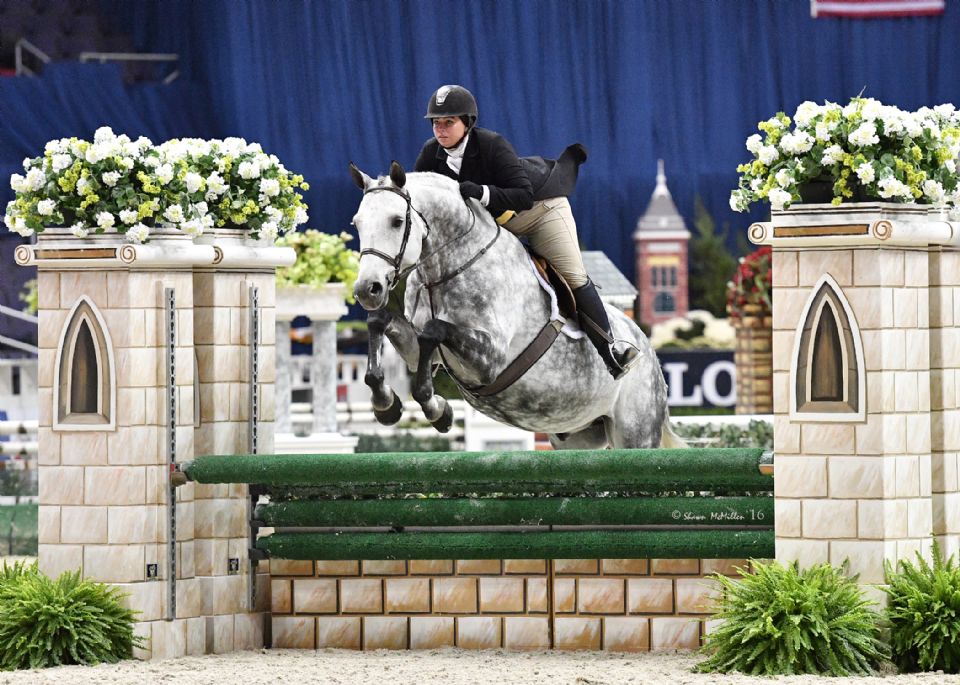 Speaking of Contina, Maggiore stated, “There is just no horse like her. She is my soul mate. I have never been successful on another horse and I have ridden my whole life. She is just a super amazing horse and we have a great bond.

“This is our first final we have ever won, so it is very exciting,” Maggiore continued. “It is the most exciting horse show. I love the entire environment and she thrives in this type of environment because she doesn’t need to go in the ring before. We didn’t bring her over until an hour before the class. She is a very special horse and I am a lucky girl.”

Maggiore worked all day and flew into Washington, D.C. from Boston just hours before the competition.

“I took a flight tonight from Boston, landed here at 6 o’clock, grabbed an uber from the airport and hopped on the horse right before the class,” she laughed. “It was a little bit of a chaotic day, but it paid off.”

WIHS concluded Maggiore and Contina’s 2016 show season. The mare will have a rest until they travel to Ocala, FL, to compete for the winter. 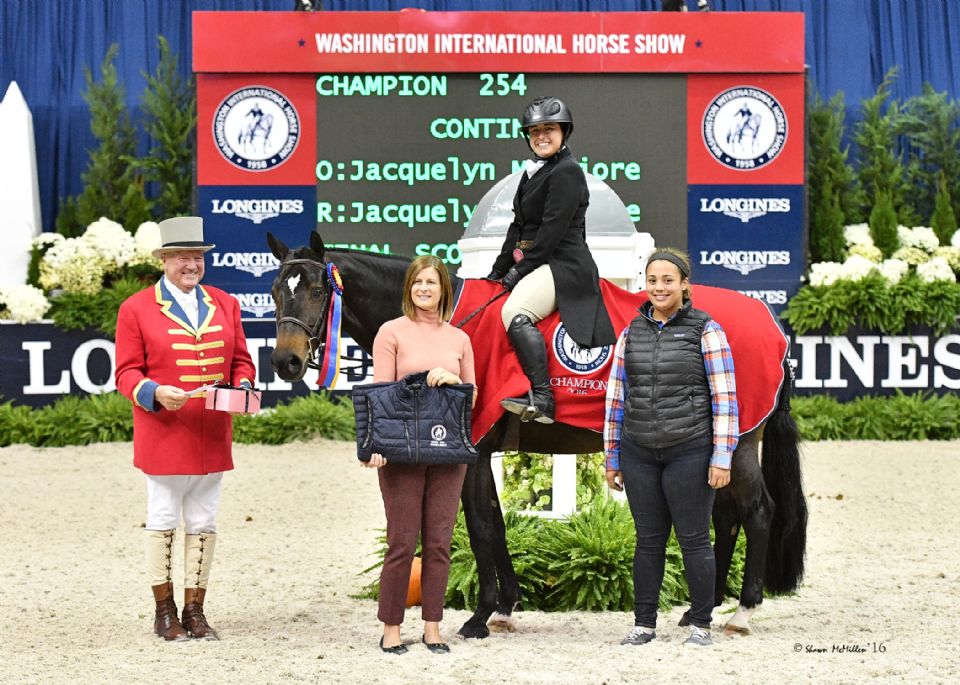 Also showing on Tuesday, the professional hunter divisions completed their first day of competition at Verizon Center. The Robotyping Challenge Trophy was presented to Scott Stewart and David Gochman’s Catch Me for their high score of 90 as the best Green Working Hunter round of the day in the Second Year division. The Fairfax Hunt Race Association Challenge Trophy for the best Green Working Hunter handy round was presented to Nick Haness and Lindsay Maxwell’s Technicolor for their high score of 92 in their First Year class. 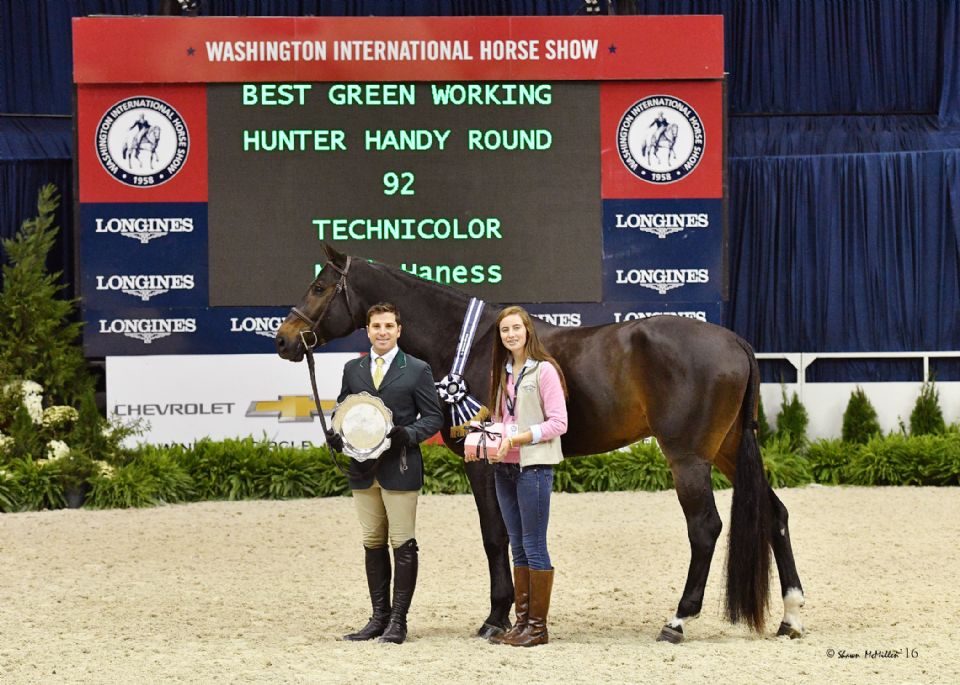 The 58th annual Washington International Horse Show continues on Wednesday with championships for the professional and amateur-owner hunter divisions, as well as the $10,000 WIHS Children's Jumper Championship, presented by The Klein Family & Lance Williamson Stables, during the day. The evening session, which begins at 7 p.m., will feature the $10,000 Adult Jumper Championship, presented by The Treacy Family, as well as the $10,000 International Jumper speed class. For full results, please visit www.wihs.org.

About the Washington International Horse Show
Established in 1958, the Washington International Horse Show is one of the most prestigious and entertaining equestrian events in North America. More than 26,000 spectators attend the six-day show, which includes Olympic-level competition along with community and charity events. More than 500 top horses and riders come to D.C. from all over the globe to jump for more than a half a million dollars in prize money. Highlights include the $130,000 Longines FEI World Cup™ Jumping Washington for the President's Cup, presented by Events DC (Saturday night), the $25,000 Puissance high jump presented by The Boeing Company and $50,000 GE Speed Final on Military Night (Friday) and Kids' Day (Saturday), a free, fun and educational community event. The Washington International Horse Show Association, Ltd. is a 501(c)(3) nonprofit charitable organization headquartered in Washington, D.C. WIHS is an official USEF Heritage Competition and is currently ranked #7 in the Top 25 Horse Shows by the North American Riders Group. WIHS is rated CSI4*-W by the Fédération Equestre Internationale, the world governing body for horse sports. For more information, please visit www.wihs.org, join us on Facebook, and follow us on Twitter and Instagram.