Washington, July 18, 2016--The Washington International Horse Show (WIHS), one of the most prestigious and entertaining equestrian events in North America, is pleased to announce the WIHS Official Prize List is now available as well as exciting news for its 58th annual event, taking place October 25-30, 2016, at Verizon Center in Washington, D.C.

"We are proud to offer a show like no other," said Victoria Lowell, WIHS President. "We have more than 26,000 enthusiastic spectators, 500 of the best horses in the world, more than $500,000 in prize money, as well as great dining, shopping, entertainment and hospitality all in the heart of our nation's capital city, Washington, D.C.”

WIHS will again host a Longines FEI World CupTM Jumping North American League event and present the coveted President’s Cup on Saturday night.  The event is an important qualifier leading up to the Longines FEI World Cup™ Jumping Final in March, which will be held for the first time in Omaha, Nebraska.

A special inaugural award will be presented in honor of legendary horseman George Morris, who will be one of our judges in the WIHS Equitation Finals this year. The George H. Morris Style of Riding Award will recognize an International Jumper rider who best exemplifies the American style of equitation and jumping and the respectful, dignified, and workmanlike manner of a true sportsman.

A $5,000 cash bonus will be awarded to the Professional Hunter Rider accumulating the most points in the professional hunter divisions.

The WIHS Young Jumper Championship Incentive Bonus Program, which encourages investment in developing young horses, will return with up to $20,000 at play, thanks to SHF Enterprises.

Additional hospitality options will be available at all levels throughout the week including tables in the Lugano and Etc. Clubs situated on the ringside terraces and in the family-friendly Acela Club. WIHS charity partners will benefit from evening parties in the Acela Club including Capital Breast Care Center, Tragedy Assistance Program for Survivors (TAPS) and the U.S. Equestrian Team Foundation.

WIHS offers several sponsorship and hospitality packages including tables on our custom-built ringside dining terraces and in the sky box-level Acela Club, as well as tickets to evening social events. Sponsorships are tax-deductible and available at all levels with a wide range of benefits and amenities. For more information, call Mary Helen Shaughnessy, WIHS Sponsorship & Hospitality Director, at 202-525-3679 or email maryhelen@wihs.org. 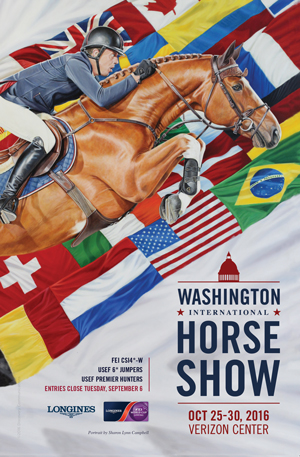 The cover of the prize list features an exciting painting of Harrie Smolders of The Netherlands and Emerald, winners of the 2015 Longines FEI World CupTM Jumping Washington for the President’s Cup, by 2016 WIHS Official Artist, Sharon Lynn Campbell, of Rochelle, Va.

2015 was Smolders second trip to Washington and his second win of the President’s Cup. “I think the first time I was here was 10 years ago and then I also won the Cup so I’m very pleased to be back and to do it over again!” said Smolders. Smolders and Emerald are nominated to the Dutch show jumping team to compete at the upcoming Olympic Games in Rio de Janiero.

About the Washington International Horse Show, wihs.org
Established in 1958, the Washington International Horse Show is one of the most prestigious and entertaining equestrian events in North America. More than 26,000 spectators attend the six-day show, which includes Olympic-level competition along with community and charity events. More than 500 top horses and riders come to D.C. from all over the globe to jump for more than a half a million dollars in prize money. Highlights include the $130,000 Longines FEI World Cup™ Jumping Washington for the President's Cup (Saturday night), the Puissance high jump presented by The Boeing Company on Military Night (Friday) and Kids' Day (Saturday), a free, fun and educational community event. The Washington International Horse Show Association, Ltd. is a 501(c)(3) nonprofit charitable organization headquartered in Washington, D.C. WIHS is an official USEF Heritage Competition and is currently ranked #7 in the Top 25 Horse Shows by the North American Riders Group. WIHS is rated CSI4*-W by the Fédération Equestre Internationale, the world governing body for horse sports.