WASHINGTON, October 24, 2015 - The 2015 WIHS Equitation Finals, presented by SAP, concluded on Saturday evening with a win for Victoria Colvin of Loxahatchee, FL. Forty of the nation’s top junior riders qualified to compete in this year’s championship, which was held over three phases of competition. Riders began competing over a hunter course on Friday and returned over a jumper course Saturday afternoon. Their scores from the two rounds were then combined, and the top 10 competitors returned for a final work-off Saturday night, in which they switched horses by way of a random draw and jumped the same course one more time.

In her final year as a junior, Victoria Colvin won the title. She began the first two phases of competition riding Dr. Betsee Parker’s Patrick, then switched onto Morgan Ward’s mount Vondel DHZ. Her hunter score of 91.5, combined with her jumper score of 92.25 and a final score of 92.5 in the work-off combined for a solid 276.25 points for the win overall. 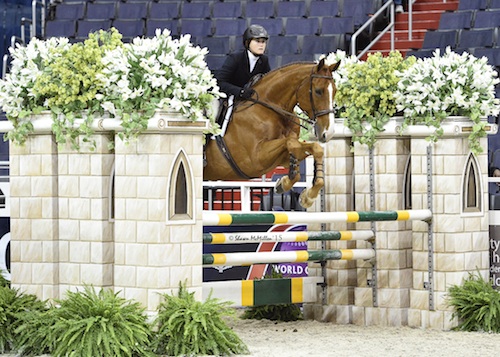 Madison Goetzmann of Skaneatles, NY, finished second with a score of 267.25. Goetzmann rode Savannah Dukes’ Contelido in the hunter and jumper phases with scores of 86.25 and 90. She then switched onto Hunter Holloway’s mount Any Given Sunday, owned by Hays Investment Corp, to earn a 91 in the final work-off.

Holloway, of Topeka, KS, took home the third place prize with her score of 266.75 overall. She jumped Any Given Sunday to scores of 89 and 93.5, then earned an 84.25 aboard Mckayla Langmeier’s mount Eclipse, owned by Missy Clark.

Morgan Ward of Milford, NJ, jumped her own Vondel DHZ to scores of 87.5 and 87.625. She then jumped Colvin’s mount Patrick to a 91 in the final work-off to move into the fourth position overall. Langmeier earned scores of 88.25 in each of the first two phases of competition with Eclipse and then jumped Goetzmann’s mount Contelido to an 86. She finished fifth overall with a score of 262.5. 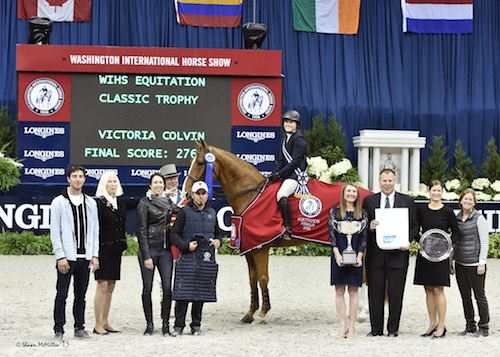 The judges for the class were Bill Ellis and Shane George on panel one and Susie Schoellkopf and Joe Fargis on panel two.

Colvin has competed in the Final the last several years and was excited that all of her hard work finally paid off. Colvin recently started training at Heritage Farm, working with Andre Dignelli and Patricia Griffith.

“I have had a lot of great trainers who have helped me get to where I am now,” Colvin acknowledged. “Patrick has been an amazing horse, so to win on him here was just a fantastic feeling. Having it be my last round on him was emotional, but it was good. It was really good.” 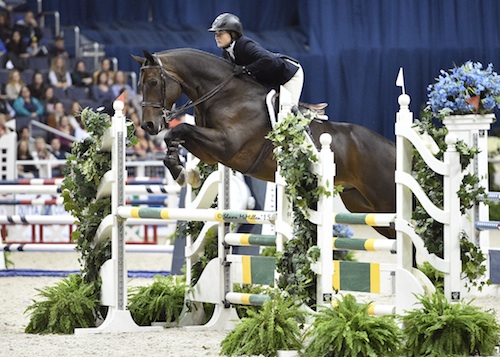 Speaking of her final work-off aboard Vondel DHZ, Colvin remarked, “Thankfully my horse came from Heritage. I have never ridden him before, but I know that Patricia knows him well. He was very straightforward. He landed left mostly. He had a fantastic jump and a quick front end, so he was very fun.”

Griffith was very proud to be a part of the team that helped Colvin get this momentous win as her junior career comes to an end, and spoke of Colvin’s natural ability.

“Tori is awesome to work with,” Griffith praised. “She has such a great feel for the horses. Even on a strange horse, right away she has a good sense of what she should do or what she should jump. It is easy to have a lot of dialogue with her and to have a lot of respect for somebody with that kind of talent. Training her is really just helping her and being there to offer a little bit of advice here and there. It is a pleasure.”

Second place finisher Madison Goetzmann was competing in the WIHS Equitation Finals for the second time and was pleased with her result this year.

“I have been coming here since ponies and to even be in the top ten was really an amazing feeling for me,” Goetzmann acknowledged. “This is a new horse, and it went great. I am really happy, and I am proud of my horse.” 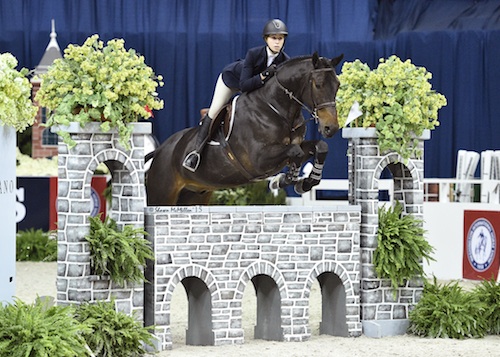 “I was very excited when I heard that I was getting switched onto Hunter’s horse, Sunny, because I have heard very great things about him,” Goetzmann said of her work-off. “I was a little nervous because this was my very first horse switch, but Hunter was telling me how great a horse it is and how he is pretty straightforward. As soon as I jumped the first jump, I gained a lot of confidence and was able to breathe. He was just so great.”

For Holloway, Any Given Sunday (aka Sunny) has been a fantastic horse, and she knew that he would carry any rider to a great round.

“Sunny is just an amazing horse; he is super consistent,” Holloway stated. “He is super straightforward and super easy. I could not do it without him or my trainers and everyone that is a part of my team. It is an awesome feeling to even be here.” 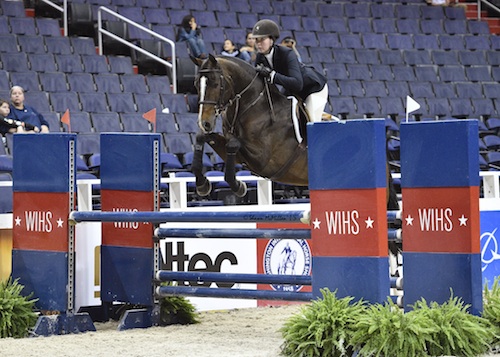 Hunter Holloway and Any Given Sunday. © Shawn McMillen Photography.

Goetzmann trains with Stacia Madden, who spoke about how she helps students get to know their new horses for the final work-off.

“It is just paying attention to the horses and watching them go,” Madden noted. “You have to make sure you can figure out what leads they land on or if there are any special turns. I do think this year had a great group of horses for everyone to switch on to. There was no weak link. I think everybody had a really equal playing field this year, which was great.”

Griffith also commented on the horse switch, noting, “I feel like I got a little bit lucky this year because both of my riders in the top ten ride a lot of hunters and a lot of different hunters. Then they switched onto each other’s horses, so I was able to tell them exactly how to warm them up and exactly what they were going to do in the ring, and they pretty much did it just like that.”

Don Stewart also trained two students in the top ten, including Holloway, and was proud of his riders this year.

“My two girls went great in the top ten. I thought Hunter rode to win the class,” Stewart stated. “Hunter always delivers. She always rides great, and she is easy to work with. I thought they did a nice job judging. They certainly got the top three right for sure.”