The 2014 WIHS Equitation Finals concluded Saturday evening with a win for Michael Hughes (18) of Allendale, NJ. Hughes rode Jordyn Rose Freedman’s Finnick through the first two phases of competition, finishing with a score of 88.50 in the hunter phase and 90.25 in the jumper phase. Returning for the final work-off sitting in second place overall, his ride aboard Mckayla Langmeier’s mount Skyfall scored a 93.50, giving a three round total of 272.50 for the win. He is trained by Missy Clark and John Brennan at North Run along with Linda Langmeier.

For his win, Hughes was presented with the WIHS Equitation Classic Trophy donated by Mr. and Mrs. G. Ralph Ours, III. Finnick was awarded The Lugano Memorial Trophy donated by Stoney Hill as the winning horse of the night. 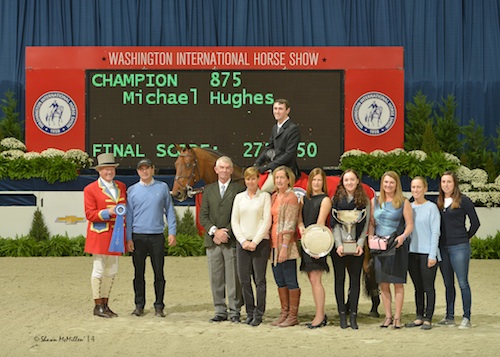 Michael Hughes in his winning presentation

Hunter Holloway of Topeka, KS, finished second with a 267.375 total. Holloway rode Hays Investment Corp.’s Any Given Sunday in the first two rounds with a score of 89.13 in the hunter phase and 89.75 in the jumper phase. Her final work-off round aboard Caitlin Boyle’s mount Loredo scored an 88.50.

Mckayla Langmeier of E. Granby, CT, placed third with scores of 86.75 and 89.50 riding Linda Langmeier’s Skyfall in the first two rounds and a 90 in the final work-off aboard Michael Hughes’ mount Finnick to total 266.250.

Hunter Holloway and Any Given Sunday

Hughes had no experience with either of the horses he showed in the competition this week, but the rider’s talent and experience guided both of his mounts to great rounds. Finnick was a borrowed ride just before the final, and the seven-year-old Westphalian gelding (by Cayetano L) excelled.

“I didn’t really know my horse too well,” Hughes explained. “I have only ridden him about three times, but I have seen him go a lot and he is a fantastic horse. I was so lucky to ride him this week. I can’t thank Linda Langmeier and the Freedman family enough for letting me ride him.”

Langmeier explained that the gelding had never even been to indoors before. “He does the equitation for a 14-year-old girl who just started in Florida this past year,” she detailed. “The opportunity for Michael to ride him arose through the suggestion of Julie Welles and we just sort of pulled the team together to try and help Michael have the best opportunity possible. The family was so amazingly generous to allow us to use the horse. It was also a great experience for the horse to be here because he has never competed at indoors before, and he is only seven.”

Commenting on his rounds with Finnick and Skyfall, Hughes stated, “”The jumper phase was pretty basic. You got to see a lot of the lines all day. For the switch, I have seen Mckayla’s horse go a lot. I saw her go earlier, so I kind of knew what I had to do and Linda knows the horse very well and so does Missy and everybody. The biggest thing was just picking up the left lead. They said just right when you get in the ring, he is very easy and he was. He was really straightforward. I didn’t need too many jumps to get used to him because you really just sat there and let him do everything, especially since he had jumped the course already once.” 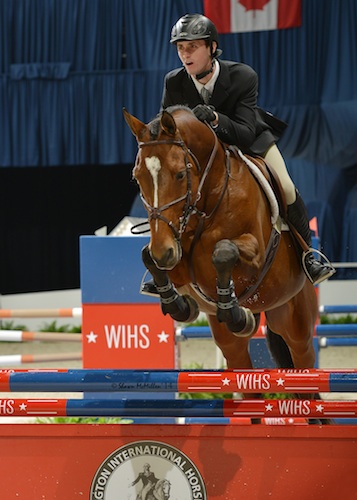 Hunter Holloway was on a horse that is new to the equitation ring with Any Given Sunday, who is usually her mother’s grand prix mount. Last week in Harrisburg was the horse’s first equitation show, and he has taken to the discipline easily.

“I just borrowed him for indoors this year, and he has been absolutely amazing,” Holloway acknowledged. “He is such an amazing horse just to come here. I did a grand prix on him a week before Harrisburg, and he came in and was perfect at Harrisburg. He came here and he was super yesterday and super today. I can’t thank my mom and Hays Investment Corporation enough for letting me ride him.” 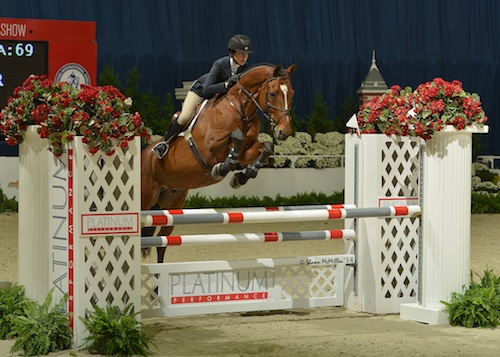 Holloway also had a great round with Caitlin Boyle’s mount Loredo, who is owned by Micaela Kennedy. “He was super straightforward and super easy. It was a great round. I liked the course and the jumps came up nicely, so it worked out well. I have known Caitlin for a while and have seen him show multiple times and throughout indoors and watched her. I had an idea of what I was getting on.”

The judges for the class were Jimmy Torano and Linda Hough on panel one and Philip De Vita and Mark Leone on panel two. Torano weighed in on the judge’s decision following the competition, stating, “It is the same for all of these classes. You are talking about splitting hairs. All three of them rode super rounds and did an amazing job on the other’s horses. Not only the top three, the top six; they just came in and had some amazing rounds. Michael’s round on Mckayla’s horse was flawless. They are all super riders.” 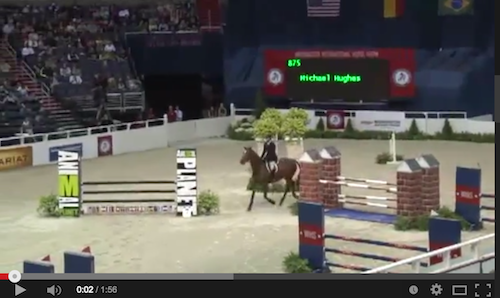 Trainer Missy Clark spoke about her team’s preparation for the competition and her confidence in Hughes’ ability going into the final. He also won the Platinum Performance/USEF Show Jumping Talents Search Finals in 2013 and has been very successful throughout his junior career.

“It is kind of a continuation to what we do all year,” Clark noted. “There isn’t any special prep necessarily, although Michael had a horse switch here, so we had a few lessons early in the week out at Prince George’s (Equestrian Center) so he could get to know this horse. Michael has ridden for years and he has had so much mileage that I knew it wouldn’t be a big issue for him to hop on at the eleventh hour and get along well with the horse. He is such a great rider and such a talent.” 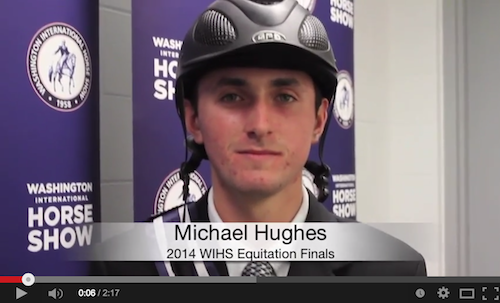 Watch an interview with Michael Hughes!

Heading on to next week’s ASPCA Maclay Finals in Kentucky, Hughes feels good about his chances and was honored to win such a prestigious class. “I think it is going to give me a little bit of a boost of confidence going into next week,” he declared. “It feels amazing. It is my last junior year and hopefully I can come back next year and do the open jumpers or something. I haven’t come to this final as much as the others and there is a lot of history behind this. Some great riders have won, including McLain Ward, Julie Welles and others.”