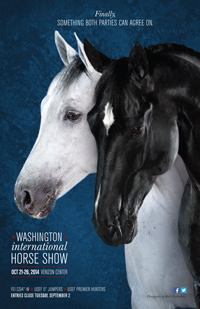 Conor Swail of Ireland (ranked #33 in the world as of June 30) competed for the first time at WIHS in 2013. As a top international rider, he noted that the increase to a four-star show is important to riders who want to maintain their ranking. He noted, “The ranking points are always very important to us. We want to try and keep in the top 30 in the world. It's always nice to have a bigger status on the FEI standings.”

WIHS joins an elite group of horse shows in the U.S. with a four-star rating and is one of only a handful of shows designated as a CSI4*-W, a World Cup Qualifier. Points earned in the WIHS $125,000 President’s Cup Grand Prix count toward eligibility for the Longines FEI World Cup Jumping Final, a highly prestigious and competitive championship held each April.

"WIHS is a unique show jumping competition," said Kent Farrington, winner of last year's $125,000 President's Cup Grand Prix CSI3*-W with Blue Angel. "Being in the city provides incredible atmosphere; it's great to jump in Verizon Center, and they have great crowds. The additional prize money and FEI World Cup ranking points we get at a four-star event is fantastic."

Swail agreed, “The coolest thing is that it's in the center of the city. It's a beautiful stadium, and everything is so close by. There's quite nice crowds. It's quite unusual, unlike any other show I go to. It's a nice ring to ride in, and the most enjoyable was the costume class.”

Also new this year, FEI horses will be stabled in a dedicated, outdoor tent with larger stalls. "We’re extremely pleased WIHS has made this change in stabling," said Farrington, a board member of the North American Riders Group. "It makes a big difference knowing that our horses are in a safe, secure environment."

At its June meeting, the U.S. Equestrian Federation Board of Directors named the Washington International a USEF Heritage Competition, a prestigious designation reserved for long-established shows widely recognized within the sport and with significant involvement in the local community. WIHS joins an impressive list of Heritage shows, including the Devon Horse Show, the Hampton Classic and the National Horse Show.

“It’s a great honor to be recognized as a USEF Heritage Competition. We’re extremely proud of our history and commitment to providing the finest in equestrian sport,” said Victoria Lowell, WIHS President. “We love hosting national and international riders in the nation's capital and sharing our passion for horses with the local community.”

“We have a great longstanding relationship with The Boeing Company,” said Bridget Love Meehan, WIHS Executive Director. “Boeing has helped us build WIHS Military Night on Friday into a powerful program blending exciting competition with recognition of our servicemen and women, and support for our official military charity, Tragedy Assistance Program for Survivors (TAPS). We’re very pleased Boeing will also sponsor the Leading International Rider bonus this year.”

Swail commented, “The bonus is very nice. If you have a great show, you're also rewarded a little more than the rest of the riders because you've done the best, and your consistency is rewarded.”

The 2014 competition will also feature a new $5,000 leading hunter rider cash bonus, which will be awarded to the rider accumulating the most points in the professional hunter divisions. The Young Jumper Championship Incentive Bonus Program, which encourages investment in developing young horses, will return with up to $20,000 at play, thanks to SHF Enterprises.

About the Washington International Horse Show, www.wihs.org
An equestrian tradition since 1958, the Washington International Horse Show is the country's premier metropolitan indoor horse show. Each October, more than 500 world-class horses and riders, including Olympic medalists, arrive in Washington for six days of exciting show jumping and hunter competition. Highlights include the $125,000 President's Cup Grand Prix (a World Cup qualifier), the Puissance (high jump) and the WIHS Equitation Finals, an important goal for top American junior riders. Exciting equestrian exhibitions, boutique shopping and community activities, such as Kids' Day and Breakfast with the Mounted Police, round out this family-friendly event. WIHS is an official USEF Heritage Competition and recognized as a Top 25 Horse Show by the North American Riders Group.

Since its debut, WIHS has been a Washington, D.C. institution attended by celebrities, business, military and diplomatic leaders, as well as countless horse enthusiasts of all ages. Washington International Horse Show Association, Ltd. is a 501(c)(3) nonprofit charitable organization headquartered in Washington, D.C.