Washington, DC – July 19, 2013 – The 55th Washington International Horse Show CSI 3* (WIHS) is pleased to announce an increase in the prize money awarded this year in the open jumper and hunter divisions. WIHS will offer nearly half a million dollars in total prize money in 2013, more than a $70,000 boost from 2012! The official prize list for 2013 competition is now available online at wihs.org/prize-list/, featuring some exciting new changes to the schedule.

The country's only metropolitan indoor horse show, the 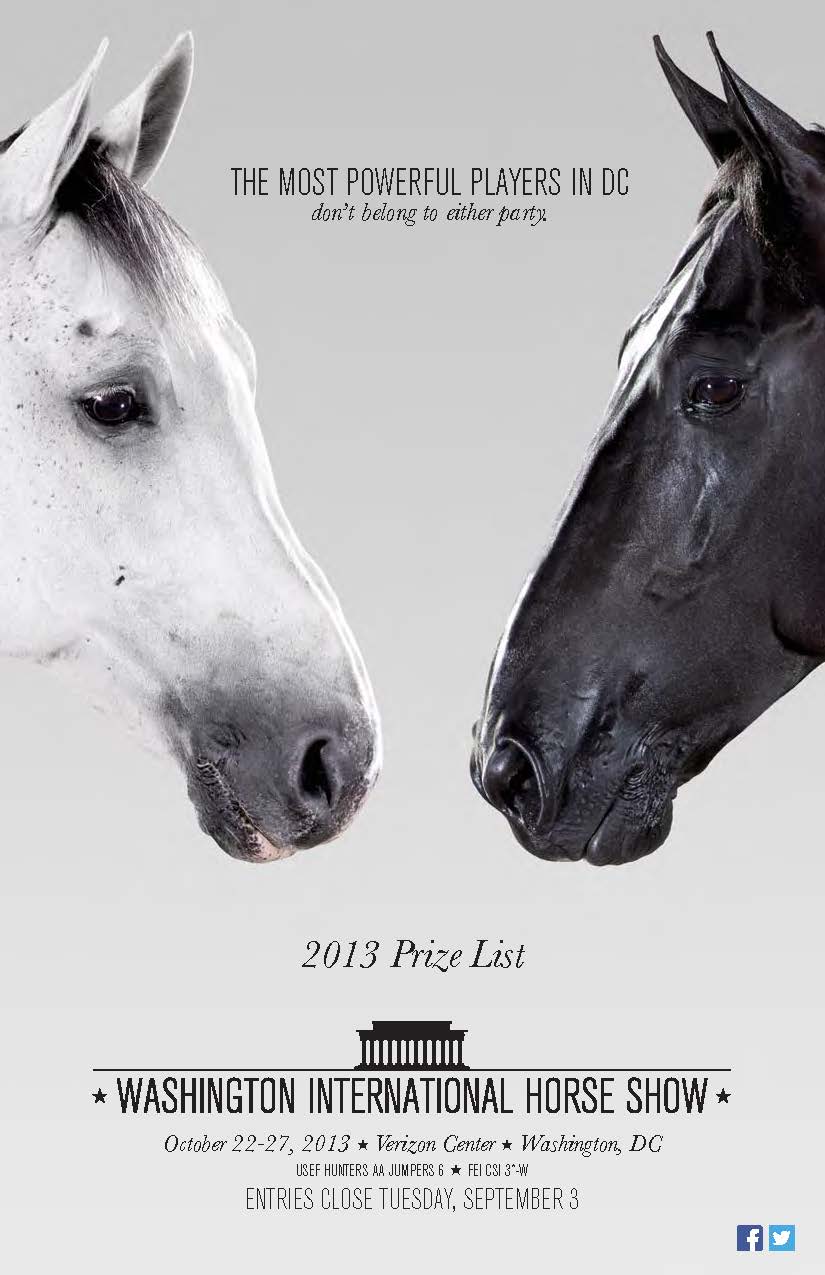 “WIHS has adjusted the open jumper division schedule and overall money to attract even more top riders around the world and provide an amazing opportunity for our more than 20,000 spectators to experience show jumping at its highest level,” said Bridget Love Meehan, WIHS executive director.

Olympic gold medalist McLain Ward is a regular competitor at WIHS and has won the President’s Cup Grand Prix three times. He is also vice president of the North American Rider's Group, which ranked WIHS as a Top 25 Horse Show last year.

He commented, “It's great that WIHS has increased the prize money for the open jumpers. Anytime a horse show can step up and raise money makes it better for the riders, and it also makes it a more prestigious event. WIHS is a great show in a city we all enjoy. It's nice to see them make the effort to stay current with the big shows around the world.”

Higher purses are also offered in both the low and high junior/amateur-owner jumper divisions with an increase of $7,500.

Prize money for the hunters has also grown by $29,000 and the high performance working hunter division will be featured with two classes on the opening night of the show, Tuesday Oct. 22, showcasing the country’s top professional hunters.

WIHS will accept more entries this year in the amateur-owner working hunter 3'3” and the regional pony hunter sections, offering more competitors a fantastic chance to ride at Verizon Center. Cross-entry restrictions have been modified for horses and riders competing in the WIHS Children's and Adult Championships. As well, the entry process will be streamlined through the option of electronic submission through EquestrianConnect.com.

Earlier this year, WIHS announced the extension of their agreement with Verizon Center through 2016, allowing the show to continue to feature equestrian sport in a high-profile media market and make it more accessible to new audiences. Sponsors benefit from participating in a fantastic sporting and social event, and riders get to compete in front of large, enthusiastic crowds in a city-center sports arena.

WIHS President Victoria Lowell reinforced the significance of these improvements for the 2013 competition, and she looks forward to welcoming top competitors from around the world to Verizon Center this fall.

“Everyone at WIHS understands how important it is to keep providing great competition and significant prize money for the top equestrians that travel to our show each year,” Lowell stated. “We are always looking for ways to improve our competition and make it the best possible event for our exhibitors. We feel that this increase in prize money, plus the improvements to the schedule, is a big step forward for the future of the show.”

The WIHS has a venerable tradition of hosting the best horses and riders with a historical record of competitors featuring Olympians, national champions, many talented young equitation riders, and top-ranking junior, amateur, and pony competitors.

An equestrian tradition since 1958, the Washington International Horse Show is the country’s only metropolitan indoor horse show and the pinnacle of the equestrian year with top riders, including Olympic medalists, and their world-class horses. More than 500 horses participate in show jumping, hunter and equitation events during the six-day show, with many competing all year just to qualify. Highlights include the President’s Cup Grand Prix (a World Cup qualifier), the Puissance (high jump) and WIHS Equitation Classic Finals featuring the country’s top junior riders. Exciting equestrian exhibitions, boutique shopping and community activities such as Kids' Day and Breakfast with the Mounted Police round out this family-friendly event.

Since its debut, the WIHS has been a Washington, D.C. institution attended by celebrities, business, military, and diplomatic leaders, as well as countless horse enthusiasts of all ages. Washington International Horse Show Association, Ltd. is a 501(c)(3) nonprofit charitable organization headquartered in Washington, D.C.