The Gambler's Choice Costume Class sponsored by Louisburg Farm and Beth Johnson was a treat for the crowd as riders dressed as various characters competed over a course where each jump carried points, and each jump cleared added to the rider's points.

Pessoa wore an authentic Formula One racing outfit for the class, complete with helmet. His jumpsuit, signed by Formula One world champion Mika Haakinen, is something that usually hangs in his closet, but he brought it out for this special class. “It was a bit slippery, but it was okay,” he said with a smile. “(With the helmet), you only see what's ahead of you, you don't see the blind spots on the side. If you just keep your head a little bit up it's fine because it's much heavier than we're used to. I'm really a fan of motorsports. It would have been my job if I didn't ride horses.”

Pessoa enjoyed the costume class and a great addition to the WIHS schedule. “It's fun and it's important for the crowd. Tonight they had a nice turn-out with all the kids that are here. They saw a traditional class and it was a little bit more fun for them. It's important to give back to them as well. Without the fans, the sport would not be much,” he said.

Pessoa and HH Ashley, owned by Double H Farm, competed in the second half of the class held during the evening session. They were one of six clear rounds to advance to the jump-off. Pessoa and HH Ashley set the “Travelers Time to Beat” with no faults in a time of 31.88 seconds. 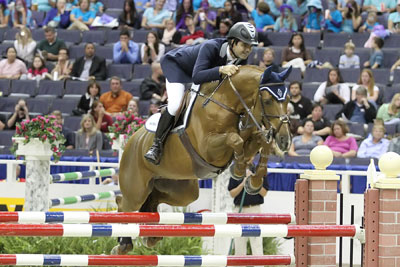 “It was pretty difficult,” Pessoa said of the course, designed by Canadian Michel Vaillancourt.. “The whole day today was difficult and it’s a small arena. Fences come up very quick and you need the horses to be really obedient. It was a good test, a nice preparation for Saturday.”

Going into the jump-off, Pessoa did not want to go all out. “Until now I haven’t gone very fast in the jump-offs. Last week the jump-off was pretty slow, so I just wanted to try and have a good track and not go crazy, keep some for Saturday. Hopefully we make it to the jump-off and it just worked out.”

Pessoa and HH Ashley have a new relationship, having only been together since May, but they have been successful. They won the World Cup qualifier grand prix in Harrisburg just last week.

“I have been taking her along quite slow. She’s getting better every time now. It was time to start pushing her a little bit and start doing some bigger courses. She’s been really serious the last two weeks,” Pessoa noted.

He said of HH Ashley, a 10-year-old Hanoverian mare by Accorado, “She is a nice type and really powerful, really the sort of horse that you dream of. (She's) small and compact, but she has a lot of scope and she’s really careful. The rideability is still not 100% but we’re still working on that. I think she’s really a special horse.”

Kristin Glover and The Boy Wonder were the only clear trip in a time of 64.873 seconds in today's $2,500 Amateur-Owner Jumper Time First Jump-off class. In second place as the fastest four-faulter was Tracey Weinberg on Larone, who finished in 63.785 seconds. Jean Sheptoff and Peaches were third with five faults in a first round time of 69.680 seconds.

Glover, who is from Richmond, VA, has owned The Boy Wonder, a 14-year-old Appendix Quarter Horse, for three years. “It has just been a blast,” she said of their partnership.

Of her clear trip, Glover said, “It was smooth. So many times my first round is a little rough, but this one we came right out and just put in a nice clean round, so I was happy.”

This is the first time that Glover has shown at the WIHS. “This was a nice way to start and I really like the ring. This is something that I have always wanted to do. I stopped riding for a long time and got back into it about six years ago. It has just been a lot of fun and it has gone great,” she remarked.

For her win tonight, Glover was presented with the “Footloose” Perpetual Trophy in remembrance of Ruth Ellen Wilmot, donated by The Curtin Family, in honor of the 1990 winner “Footloose,” ridden by Caroline Curtin.

In the $2,500 Junior Jumper Time First Jump-off class sponsored by AAA Equestrian LLC, a similar situation took place. Chase Boggio of Canton, GA, and his horse Hennessey were the only clear round (64.106 seconds) in the class to take the blue ribbon. Hasbrouck Donovan and Delilah were just off the pace in the first round in a time of 69.046 seconds, which gave them one time fault. The fastest four-faulter was Karen Polle on What Ever in 62.897 seconds for third place.

Boggio has only had Hennessey, a 12-year-old Mecklenburg gelding by Heraldik, since May when he purchased him from New Zealand Olympian Kirk Webby. Boggio said of his horse, “He's done a lot of grand prix classes. He's a lot hotter than my old horse Perfekt, who was sort of a slug. You don't have to worry about covering the back rail of the oxers. He just has enough blood to cover them without a lot of leg.”

The pair have won two other classes together in their short time together, but this is Boggio's first win in the jumpers at the WIHS. “It feels good because I don't get a lot of ring time in the jumpers. It's just nice and reassuring that my hard work in the jumpers pays off too,” he said with a smile.