The Green Conformation Hunter division was the second to be held today in the arena at Verizon Center. Stewart and Declaration, owned by Fashion Farms of New York, NY, swept the model and both over fences classes. Penelope Ayers and Ravens Wood Farm sponsored this year's classes, and following the final class Stewart and Declaration were awarded The Lisa A.H. Cudahy Perpetual Trophy.

This was the first time that Declaration has shown indoors, but he handled it very well.  "He hasn't done any indoor horse shows, so I was just a little bit nervous for him the first time, but then he was really relaxed," noted Stewart. "He's not usually spooky about the jumps or anything, but he's never
been in such a tight area. He was good, I was really pleased with him."

The next division to be held was the Green Working Hunters, beginning with the First Year Hunters. Stewart, of Wellington, FL, was at the top of the callback list once again with Way Cool. The pair claimed the blue ribbon in both of the over fences classes, sponsored by The Pryde Family. Stewart and Way Cool won The Robotyping Challenge Trophy and The Fairfax Hunt Race Association Challenge Trophy following the completion of the Second Year Green Working Hunter division for their excellent performance today.

"I've had Way Cool since he was two-years-old and he's just turned seven," said Stewart. "I took a little extra time because he used to jump too high, like really high. He didn't do anything last year; he stayed in Florida and just got hacked lightly. He just started showing again in Florida this past season. He's cool because he really jumps hard and nice; he tries to jump perfect every time."

Stewart did not show at the Pennsylvania National Horse Show Last week, and it was a plan that paid off. "Capital Challenge takes so much out of the horses," he commented. "It's a great horse show, but there's a lot of energy involved. I think the horses are fresh because they haven't really jumped since Capital Challenge; they are feeling a little happy about doing the jumping again."

Earlier in the day the Regular Conformation Hunters, sponsored by Mrs. Stephen C. Clark, Jr., competed with Francesca, owned by Pony Lane Farm of Bluffdale, UT, and Maggie Jayne winning the first over fences class and garnering The Miss Budweiser Challenge Trophy. Peg Seals won the handy class with Starstruck, owned by Savannah Jenkins of Virginia Beach, VA, during the Second Year Green Working Hunter division, sponsored by the Wasserman Foundation. The pair had an excellent performance, choosing all the difficult options. The Regular Working Hunters
competed next, and it was Jersey Boy, owned by SBS Farms of Buffalo, NY, and Jennifer Alfano who took the top prize in the handy class, by completing a flawless round, besting John French and Overseas who placed second. Alfano was presented with The Burling Challenge Trophy for her stellar ride.

The Amateur-Owner divisions were last to show during the day performance at the Washington International Horse Show. The Amateur-Owner 18-35 Hunters competed first, with Alex Paradysz, of Mill Neck, NY, and Late Entry winning the blue ribbon over fences. During the Amateur-Owner 36 & Over Hunter division Brad Wolf, of Memphis, TN, laid down a perfect trip with Andiamo to earn the top call. Kim Davis and Rustica Farm sponsored all of today's Amateur Owner Hunter classes.

Wolf was somewhat nervous about competing today, because he knew Andiamo can get nervous at indoor shows, but the pair had an excellent day. "Andiamo felt great, he was well prepared and really calm," smiled Wolf.

Andiamo is a new ride for Wolf, who just purchased the gelding this year. "I saw him three years ago when he was champion at Devon in the Working Hunters with John French, and I fell in love with him," he explained. "I've always watched this horse and I've wanted him ever since. We heard he was for sale at the end of Florida and I was really excited."

After Indoors Andiamo will have two months off, but he will then continue on and compete at the Winter Equestrian Festival with Wolf. Next year, Wolf's goal is to qualify for the Devon Horse Show.
The Washington International Horse Show will continue tomorrow with the completion of professional hunter division and the Amateur-Owner Hunter divisions. Awards will be presented to the High Point Green Working Hunter, the Grand Champion Hunter, the Leading Hunter Rider, the

Photo Credit: Scott Stewart and Declaration took home three blue ribbons for their excellent performance during the Green Conformation Hunter division. Photo By: Rebecca Walton/PMG. Photograph may be used only in relation to this PMG press release. 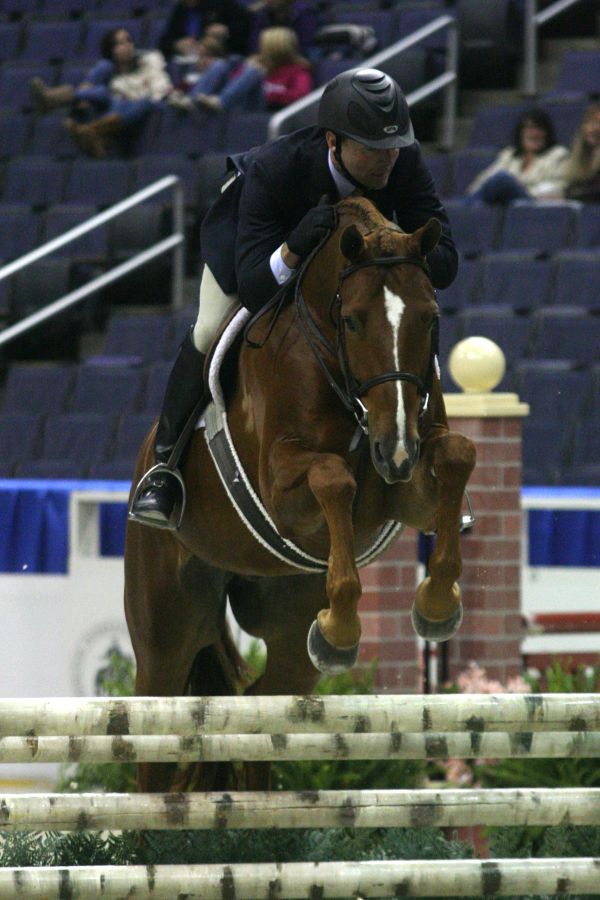 Photo Credit: Scott Stewart and Way Cool were awarded The Robotyping Challenge Trophy and The Fairfax Hunt Race Association Challenge Trophy, after winning both of the First Year Green Working Hunter over fences classes. Photo By: Rebecca Walton/PMG. Photograph may be used only in relation to this PMG press release.

Photo Credit: Brad Wolf and Andiamo took home the top prize during the first Amateur-Owner 36 & Over Hunter over fences class. Photo By: Rebecca Walton/PMG. Photograph may be used only in relation to this PMG press release.